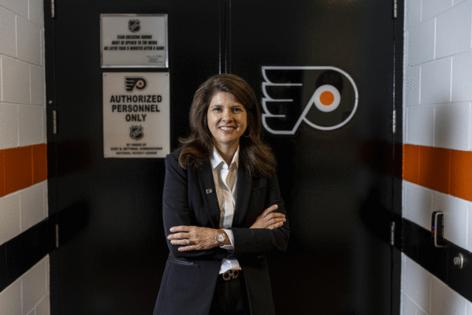 PHILADELPHIA — After the Chicago Blackhawks named Jaime Faulkner their president of business operations on Dec. 16, 2020, a flower arrangement was delivered to her. The sender? The first woman to ever be hired to that position in the NHL — the Flyers’ Valerie Camillo.

Camillo, who helped blaze the trail for women in senior positions in hockey when she was hired by the Flyers in 2018, believes strongly in signals and was expressing her delight in Faulkner’s news. Whether it comes in the form of flowers, notes, phone calls, or Gritty videos, when women around the league see Camillo’s name listed as the sender, they experience a tangible sign of her support.

That support marks a generational shift. Camillo’s mentors in the male-dominated fields in which she has worked told her stories about women competing against one another for one spot at the table. But in recent years, women in these prominent positions have realized the benefits of helping and supporting one another, said Kim Stone, president of UBS Arena and a mentor of Camillo’s.

It helps that Camillo, the woman who once held the one spot at the table in the NHL, believes strongly that inspiring and welcoming other women lifts all women.

Camillo, who recently was promoted to president and CEO of Spectacor Sports and Entertainment, has always been confident in her own merit and right to be in the room. But the reality is that doubts fueled by gender identity still exist, whether it’s women experiencing impostor syndrome because they are seeking a position that no woman, or very few women, has held, or from those, internally and on the periphery, doubting women’s credentials for particular jobs

Since breaking into the sports industry, Camillo has worked to change that. This year has produced the biggest wave of change yet, as several women were hired or promoted to prominent roles with NHL teams, including six women being named assistant general managers. Before January, there had been only one female assistant general manager (Angela Gorgone in 1996-97) in the 105-year history of the NHL.

While it was rewarding to see the NHL have a landmark year in terms of female hires, Camillo can’t wait for the day when it’s the norm.

“The next step is [women] are able to find they’re competitive for every job in hockey and every job in sports, whether that’s CEO or president or something on the hockey operations side of the business or even commissioner, whatever it is, that it wouldn’t be something unique or rare,” Camillo said.

Camillo is used to shocking men. She’s a “junkie” for stats and can remember the surprised looks she’d get at high school lunch tables and college bars when she’d “drop some knowledge” into men’s sports conversations.

Left wing Reilly Smith scored in the fifth round of a shootout and the Golden Knights defeated the Boston Bruins 4-3 Monday in TD Garden.

The Knights were up 3-0 in the second period despite being without center Jack ...Read More

PHILADELPHIA — No captain Gabriel Landeskog, no winger Valeri Nichushkin, no winger Artturi Lehkonen for the reigning Stanley Cup champion Colorado Avalanche, due to injury. That was (almost) no problem for the Flyers, ...Read More

Even the NHL’s best penalty kill units have a breaking point, and the Sharks reached it on their four-game road trip that ended Sunday night in Buffalo.

There's often travel involved, that much hockey in 48 hours (or less) is tough on the body, and things seem to get compounded when you're the...Read More

Despite squandering a four-goal, third-period lead, the Wild pushed their win streak to four games by prevailing 6-5 in a shootout against the Stars on Sunday at American Airlines Center at the beginning of a four-game ...Read More

TAMPA, Fla. — Pat Maroon was taking a postgame shower following the Lightning’s 3-1 loss to the Bruins on Tuesday night when teammate Steven Stamkos approached and asked if he had seen a video circulating on social ...Read More