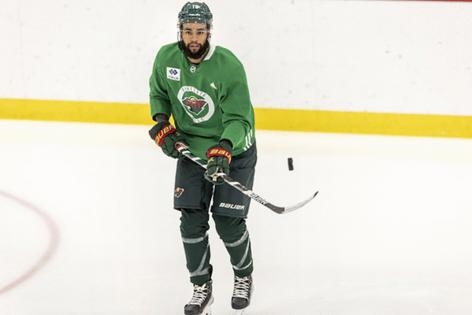 Jordan Greenway was on the ice Tuesday morning, skating with the first group at the Wild's practice facility in St. Paul. But it's unknown when he will appear in a game.

Will he miss a week to start the season? Two weeks? The first month? For now, his script will remain the same. Go to rink. Get treatment. Skate. Avoid contact. Get more treatment. Repeat.

Eventually, Greenway will be cleared to play. And the Wild will get back to being the Wild. Because Greenway embodies a lot of what the Wild want to be.

Greenway is getting back in shape after an offseason during which he was unable to sustain a workout program. The Big Rig needed to go into the shop. He had not just one, not two, but three procedures done on him.

"I was put out three times this summer!" Greenway said.

Greenway suffered a shoulder injury during the second half of the season, requiring one of those offseason surgeries. Recovery was a lengthy one, and Greenway said he had to make a nighttime adjustment to avoid reinjuring himself.

"Sleeping in a chair is terrible," Greenway said.

Eventually, Greenway got the green light to skate lightly. No shooting. Just some puck handling as he healed. He went to a rink that day but felt pain as he tried to pull on a skate, He discovered he had a cyst on one of his ankles. So it was back to the doctor to have it removed. That set him back two weeks.

A week after he rebounded from the cyst removal, Greenway was in the dentist's chair having two wisdom teeth removed. No wonder he spent part of his offseason sedated in operating rooms.

"The wisdom teeth, believe it or not, was the worst of them all," he said. "You can't eat for a certain amount of time, and I eat a lot. Things get stuck in there, and the pain afterwards.

"The first couple days were fine. So I got a little overconfident and started working out. When I got my heart rate up, my mouth would start hurting. The last five days, I was in a lot of pain. So that set me back two weeks too."

Greenway, 25, is using this period to get his conditioning in order as well as complete the final stages of his rehabilitation. The Wild take the ice in Colorado, then Dallas, then for four more preseason games before the regular season begins. For these games, and for some time after, the Wild will have to make do during Greenway's absence, no matter how long that is.

It's not easy replacing the 6-foot-6. 231-pound Greenway, who has developed into the power forward many envisioned him to be. He's not a big-time scorer — 10 goals and 17 assists in 62 games last season — but he uses his body well, gets in opponents' faces, helps on the penalty kill and combines well with the other members of what is nicknamed the GREEF line: Greenway, Joel Eriksson-Ek and Marcus Foligno.

When that line is going well, it neutralizes an opponent's best line and will provide some scoring. When you can shut down a top line, you have a great chance to win. Greenway had a hand in a lot of those last season.

Not taking away anything from Kirill Kaprizov, who is on his way to being the face of the franchise, the GREEF line assumes a leading role on the Wild.

Greenway, tuned up and nearly ready to roll, wants that line to have an even greater impact as the Wild look to return to the playoffs and go farther than just the first round, where they ran into St. Louis last season and were eliminated in six games.

"I don't know what the lines are going to be (this year)," he said. "But we're looking at doing the same thing. Going forward, I think we can do a lot more, too. Always looking at ways to improve."