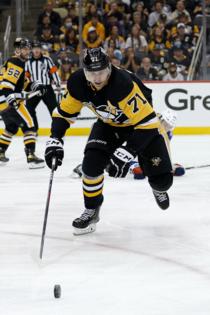 PITTSBURGH — As reporters gathered around Evgeni Malkin's dressing room stall at the UPMC Lemieux Sports Complex for the first time since pandemic restrictions were lifted, the Penguins center was clearly ready. Once he finished untying his skates following a morning workout and scrimmage, Malkin quickly started cracking off jokes.

"No more," Malkin continued, a wry smile at this point poking through.

With the Penguins opening training camp Thursday following a busy offseason where management chose to keep the band together, re-signing Malkin, Kris Letang, Bryan Rust and Rickard Rakell to contracts, the big Russian undoubtedly represents the most attention-grabbing piece.

In large part due to his substantial list of trophies and accolades — the Hart, Conn Smythe, Art Ross and Ted Lindsay among them — but also settings like this, where his honesty, humor and ability to stir the pot are on full display.

"He's such a presence," Brian Dumoulin said. "He's a guy you want to be around."

The intrigue with Malkin also remains no small thing because it appeared for parts of the offseason, including right before he ultimately re-signed with the Penguins, that he might actually move on, to the Florida Panthers or another NHL club in need of a player who scored 20 goals and produced at better than a point-per-game pace last season.

Rumors percolated that Malkin was unhappy with the situation. There's been widespread speculation that Malkin felt underappreciated by his employer.

Malkin, predictably, downplayed this or the idea that he might have left instead of signing what became a four-year, $24.4 million contract, one that ensured the 36-year-old center will retire a Penguin. Had 'em all the way, Malkin seemed to convey. He, Crosby and Kris Letang stayed in constant communication, Malkin said, either through text message or FaceTime.

As the outside world wondered whether Malkin might move on, he insisted that he remained confident things would inevitably work out.

PHILADELPHIA — As NHL training camps get underway this week, the greater hockey community is still searching for answers in the midst of multiple ongoing investigations into Hockey Canada’s handling of a sexual assault...Read More

DETROIT — A new coaching staff, many new faces in the lineup, and expected progress from the holdovers who are a year older and more experienced.

That's the Red Wings as they prepare Thursday for the first practice of ...Read More