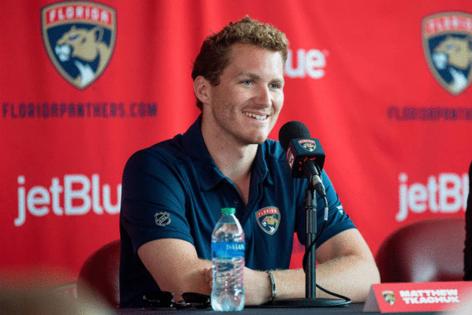 It takes a lot to get Aleksander Barkov to curse and Matthew Tkachuk, on the eve of his first training camp with the Florida Panthers, nearly got his captain there Wednesday — sort of.

After wrapping up some precamp testing at the Florida Panthers IceDen, Barkov recalled the first text conversation he had with his new All-Star teammate after the Panthers’ blockbuster July trade brought him to South Florida.

“The first message,” Barkov said, with his usual sheepish smile, “is, Effing right.”

A little while later, Tkachuk laughed at the exchange. For Barkov, it was out of place — even if he didn’t actually use the word Tkachuk surely did. For Tkachuk, it was just more of the usual. The 24-year-old right wing is unabashedly himself — Barkov said he “pisses you off” when he’s on the other team and new coach Paul Maurice affectionately called him a “pain in the [expletive]” — and general manager Bill Zito decided in the summer it was exactly what the Panthers need to take the next step in their quest for a Stanley Cup.

On Thursday, they will get their first real glimpse at what he’ll bring to Florida when they kick off camp in Coral Springs.

“[Zito] was saying that we want a guy like you, we need a guy like you and I think it wasn’t just on ice he was talking about,” Tkachuk said. “I have a certain personality that’s a lot different than most people, and I think one of the main reasons that they brought me in was for the off-ice part and helping with the culture that they have built over the last few years.”

The first day of camp will mark exactly two months since the Panthers’ blockbuster trade rocked the NHL, sending All-Star left wing Jonathan Huberdeau and star defenseman MacKenzie Weegar to the Calgary Flames in exchange for Tkachuk. Florida was less than three months removed from winning its first Presidents’ Trophy, but also less than two months removed from getting swept out of the second round of the 2022 Stanley Cup playoffs by the Tampa Bay Lightning.

With Huberdeau and Weegar both entering the final years of their contracts, the Panthers decided they couldn’t just keep their core intact and hope they’d provide results. They had to be proactive, even if it meant parting with the top scorer in franchise history and one of the league’s most underrated defenders.

A prize like Tkachuk, they decided, was worth it.

“Management felt that it was a great way for us to change, evolve and be set up for years to come,” star defenseman Aaron Ekblad said. “I couldn’t agree more with it.”