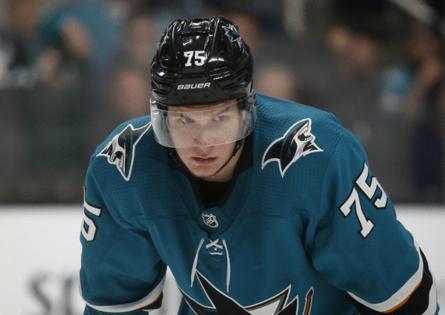 SAN JOSE, Calif. – The San Jose Sharks in recent years almost no choice but to include some forwards on their opening night rosters who just weren’t ready to play a full season in the NHL.

In 2019, it was Danil Yurtaykin and Lean Bergmann, and the following year, John Leonard and Joel Kellman made the team, almost by default. None of those players, likely promoted too soon, remain in the Sharks organization.

The new Sharks regime didn’t want those same mistakes to be repeated.

The acquisitions not only provide some stability to the Sharks’ group up front but also help prevent the organization from having to play too many forwards in the NHL before they’re ready, which could potentially hinder their development.

“If a guy earns it, then he’s going to make the team,” Sharks coach David Quinn said last week. “To me, that’s the key to any successful organization. When you rush a player and give them something he doesn’t deserve, A, I think it’s counterproductive to development, and B, the other players in the locker room look at that situation a little funny.

“I think when Mike and I talked, he certainly feels strong that these guys have to earn their opportunity. We can’t just give it away because they’re a good young prospect.”

With the additions, the Sharks now have 12 forwards on one-way contracts, with three more players requiring waivers to be assigned to the AHL’s Barracuda. The Sharks will likely carry 13 or 14 forwards for the majority of the regular season.

That doesn’t make it impossible for forwards on entry-level contracts to crack the big club’s roster out of camp, but it will be a greater challenge than it has been of late.

“I didn’t expect it to be easy to play in the NHL,” said Sharks center Thomas Bordeleau, now in the second year of his three-year ELC. “At the same time, I just want to play.”