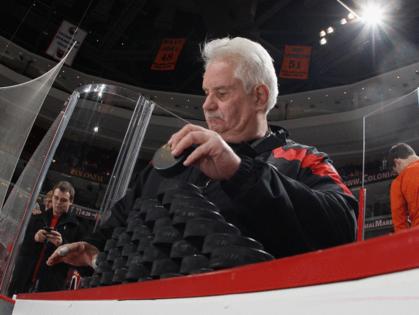 In the impending celebration of the 25th anniversary of the Carolina Hurricanes’ move to North Carolina, it’s easy to forget just what a mess things were that first season in Greensboro, not just on the ice and in the empty stands, but behind the scenes.

The team was essentially on the road at home, a burden that fell as hard on equipment manager Wally Tatomir and his two longtime partners, Bob Gorman and Skip Cunningham, than anyone else. Tatomir, who passed away Sunday at 76, went to great lengths to make sure none of the players noticed.

“He took a lot of pride in that,” his stepson Mike Beneteau said. “It was now his show and he was now in charge and it was going to be a professional atmosphere with everything perfect, every towel folded just right, every roll of tape in the right place.”

For then-Hurricanes general manager Jim Rutherford, both during the move and at other times, having Tatomir around meant it was one less thing he had to worry about.

“He was always ahead of everything,” Rutherford said. “He was so prepared for what the players wanted and what the team needed, there really aren’t any stories that jump out at you where he forgot to do something or he had to scream to get it done or had to order something at the last minute. He was so well prepared. He knew the job inside and out and he was ahead of the curve all the time.”

Tatomir, who grew up in Windsor, Ontario, first met Rutherford when Rutherford was playing for the Detroit Red Wings and Tatomir was helping out at home games while working for a trucking company. When Peter Karmanos hired Rutherford to run his junior hockey teams, Rutherford brought Tatomir along. When Karmanos bought the Hartford Whalers in 1994, they moved up the ladder together and Tatomir stayed until he retired from the Hurricanes in 2012.

“Windsor’s a small town — it’s not really that big — but it’s steeped in hockey tradition,” Karmanos said. “Wally was just really good at what he did. Really good, very supportive, and he could be critical when he needed to be. Just a good guy to work with. Very talented at what he did. Every step of the way, he was able to handle it.”

He was a fixture of the team’s early years here and an innovator in his profession with more than two dozen patents. Even after he retired, he never left the game behind. On the day he died, there was an order for his custom skate blades from an NHL team waiting to be filled at his house in Boone.

A pioneer in the sharpening and balancing of skate blades, players would come to the Hurricanes from other teams and find new life in their legs. For a slick-skating player like Bret Hedican, they also found someone who spoke their language and could make the minute adjustments that allowed them to be at their best. Matt Cullen was such a believer, he bought one of Tatomir’s balancing machines to work on his own kids’ skates.

“Wally could replicate what that felt like and make sure it felt like that every day,” Hedican said in 2020. “I wanted to kiss him on the forehead.”

Tatomir wouldn’t have minded that. He was a jovial character who knew everyone and was never shy to let them know what he thought, often with a puck tucked away somewhere in his tracksuit to throw to an unsuspecting kid. Adults too: In the hallway at Toronto’s Air Canada Centre outside the visiting locker room where Tatomir and the other equipment managers worked, the NHL types who were always hanging around would make pilgrimages to seek his counsel.

“And not only in Toronto,” Rutherford said. “It was everywhere.”

His four sons all served as his unofficial assistants over the years, meeting Tatomir and Cunningham and Gorman at the arena in the early hours of the morning to help unload the equipment truck after road games or making the first pot of coffee at 6:30 a.m. the morning of a home game, long before the players or coaches showed up.

He bought his house outside Boone in 2007 and added to it over the years; four years ago, he left Raleigh for Florida, as he had long hoped to do, and split his time between the sun and the mountains. After all those years of driving equipment trucks, he refused to let anyone move his stuff. Shane flew down from Canada to help him move in a truck borrowed from the same company that leased the Hurricanes their trucks over the years.

Tatomir had a heart attack in Florida this summer and bounced back quickly, but it eventually caught up to him this month and the family was able to gather in Boone with him on Sunday. He is survived by his wife Constance, sons Shane and Ty, daughter Kim, stepsons Derek and Mike Beneteau and 10 grandchildren. Funeral arrangements are pending.

“Really, hockey was his passion,” his widow, Constance, said. “No doubt about it. He loved his family and he had a million friends, buddies as he would say. Everybody was his buddy. He was just that kind of happy, go-lucky kind of guy.”

Quinn’s move no doubt provided a bit of a spark ...Read More

The two pieces of broken stick stayed below the goal line as goaltender Logan Thompson skated to the Golden Knights’ bench.

His frustration had boiled over with 8:26 to play Wednesday night at T-Mobile Arena. It was ...Read More