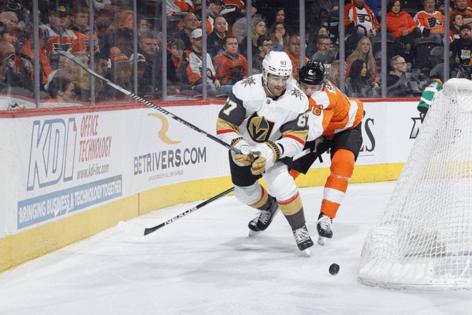 With an unfortunate and untimely fraying of collagen and elastin, what had been a near-perfect summer for the Carolina Hurricanes took a dramatic turn for the worse. The caveat on Max Pacioretty, obtained from the cap-caught Vegas Golden Knights for the princely sum of nothing, was that he was the elite finisher the Hurricanes so desperately needed if he could stay healthy.

He didn’t even make it to training camp.

Pacioretty’s torn Achilles, a freak injury suffered during an off-ice workout at Wake Competition Center on Tuesday, doesn’t quite put the Hurricanes back to square one, but it does put more pressure on all of their other offseason acquisitions, Ondrej Kase in particular. With Pacioretty healthy, Kase was merely a $1 million lottery ticket, a boom-or-bust wager that he could recapture his past form.

That would have been something the Hurricanes really wanted. Now it’s something they really need while they await Pacioretty’s return.

Justin Williams only missed 25 games in the fall of 2008, returning in December after tearing his Achilles in September. That was an abnormally quick recovery, and Williams was six years younger then than Pacioretty is now, but even a less optimistic timetable leaves plenty of time in the season.

In the meantime, they’ll have to muddle through without him. It doesn’t make sense to pull a Full Kucherov and go way over the cap while Pacioretty’s $7 million salary is buried on long-term injured reserve, because if all goes as planned they’ll have to fit him back in with time to spare in the regular season, but Pacioretty’s injury does solve some salary-cap issues, temporarily.

They are technically over the cap after getting Martin Necas signed to a two-year bridge deal, but putting Pacioretty and his $7 million salary on LTIR takes care of that for the moment. It also gives the Hurricanes the cap flexibility to take someone else’s bad contract and carry it for a few months, or add a decent player in the final year of his contract. The Hurricanes have never been shy to wield cap space as a weapon.

Any accumulated overage would apply to next season’s cap – conveniently, just as Jake Gardiner’s $4 million comes off. Pacioretty’s injury probably made Gardiner an extra $1.5 million in cash by making a cap-compliance buyout unnecessary. And while that would have saved the Hurricanes $3 million in cap space this season, it would have cost them $1.5 million next season. Now, they need the full $4 million next year.

The Pacioretty injury remains a grim cloud now hovering over what had all been sunshine and puppies and rainbows. If you were willing to believe that the combination of Jesperi Kotkaniemi and Jack Drury could outperform the combination of Vincent Trocheck and Stephen Lorentz and Derek Stepan – no guarantees there, but not unrealistic – then there was a lot to like about the Hurricanes’ offseason.

Brent Burns is an upgrade over Tony DeAngelo, at roughly the same price, and cost very little to acquire. He provides an instant upgrade to the power play, let alone everything else, even at 37. Kase, before a string of injuries and concussions, oozed potential. Dylan Coghlan was, quietly, also an important part of the Pacioretty trade, a useful right-shot defenseman.

Necas, who bet on himself this season and lost, gets two years to try again, and will be given every opportunity to prove he can play center in training camp. If not, there’s now an open spot in the top six for him to claim. Pacioretty’s loss may be Necas’ gain, if he can finally capitalize and make the most of his considerable ability and potential.

And Pacioretty should be back in plenty of time for the postseason, when the Hurricanes really need his finishing ability. They didn’t struggle to score goals during the regular season, beating up on bad teams like a good team should. They had more issues against their peers in the playoffs, and Pacioretty can still help there, assuming he fully recovers.

It’s hard to get better when you’re squeezed up against the cap, coming off a 116-point season. It’s hard merely to maintain position in that scenario, especially without mortgaging the future. If the Hurricanes weren’t better before the Pacioretty injury, they were certainly no worse, and that was a win. Now there’s less certainty about that, at least until Pacioretty is back on the ice.