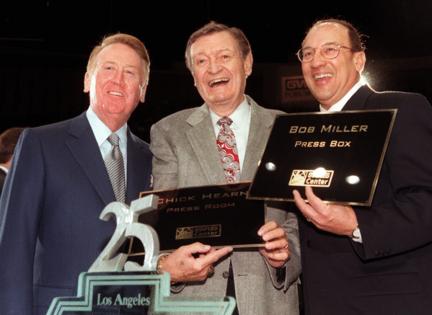 That's important to clarify because Miller, the play-by-play voice of the Kings for 44 seasons and a Hockey Hall of Fame honoree, disappeared in mid-sentence while paying tribute to Vin Scully during the Dodgers' postgame show on Spectrum Sportsnet LA a week ago.

One moment Miller was speaking via a video link, praising Scully for setting a high standard for sports broadcasters. The next, he vanished from the screen without explanation. Miller, who retired in 2017, is approaching his 84th birthday. It was all too easy to imagine ominous reasons for his disappearance.

Not to worry. It was merely a technical glitch that cut off his memories of the man who made poetry out of ordinary baseball games and was unfailingly kind in word and deed. "I had many more wonderful things to say," Miller said by phone the other day.

Too bad he didn't get to speak at length. Few people are better qualified to speak about Scully than Miller, who joined with Scully and Chick Hearn to form an unparalleled triple crown of Hall of Fame announcers for decades in Los Angeles.

Miller used his microphone to educate new hockey fans and entertain those who know the game, scolding the Kings when they underachieved, celebrating them when they triumphed, and humanizing players whose individuality was hidden beneath helmets and pads. He brought to vivid life a sport whose speed and strategy don't translate well on TV, a rare talent.

A Chicago native who called University of Wisconsin hockey and football games, Miller came to Los Angeles in 1973 after being hired by Hearn. Being from the Midwest, Miller hadn't heard much of Scully's work. That soon changed.

Not long after Miller arrived, he had an appointment downtown. He was surprised to see the attendant at the lot where he'd parked his car listening to Scully on a transistor radio, and he saw more radios held up to more ears as he walked to his destination. It was a phenomenon. "I thought, 'Gee, everybody's listening to the Dodger game,' " Miller said.

"I think I said, 'I hope someday I'll be able to make that kind of an impact.' Not that it happened, but people would want to tune in and listen to Kings games. I had no idea at that time I'd be here for 44 years."