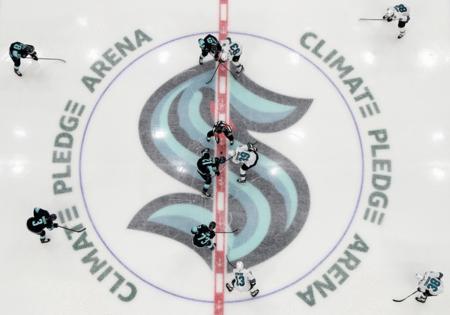 Hours after last Thursday's pact with the Kansas City Mavericks became official, social media was abuzz about the ECHL team last season employing a player, Ben Johnson, once imprisoned for sexually assaulting a 16-year-old girl in a Windsor, Ontario, nightclub bathroom in 2013. Turns out the Mavericks even made a qualifying contract offer to Johnson by a June 30 deadline before he opted to play overseas, meaning they still owned his rights mere weeks before the affiliation agreement.

Kraken general manager Ron Francis told me last Friday he'd been unaware of Johnson or his history before the social-media revelations but was subsequently assured he'd left. Mavericks GM Tad O'Had, a Yakima native, reaffirmed by email: "Ben Johnson is not on the roster and is no longer a member of the KC Mavericks. He has signed to play in Slovakia for the 22-23 season."

Sure, even had Johnson accepted the qualifying offer he'd be a Mavericks — not a Kraken — employee. The affiliation allows the Kraken to place prospects on Kansas City's roster, but the Mavericks are independently owned and have their own players not controlled by the NHL team.

But let's face it: Johnson staying would have risked becoming a public-relations nightmare for a Kraken organization that prides itself on community involvement and hockey inclusivity devoid of any threatening or abusive behavior.

Not to mention, the NHL and hockey in general are currently undergoing quite the reckoning with regard to a perceived tolerance for sexual misconduct. It began a year ago when the Montreal Canadiens drafted Ontario Hockey League defenseman Logan Mailloux, who played in Sweden during the pandemic and was criminally convicted there of secretly photographing a woman while she performed a sexual act on him and later distributing the picture to teammates.

Then in November, an independent investigation commissioned by the Chicago Blackhawks concluded that team's front office covered up an alleged sexual assault by video coach Brad Aldrich against onetime Everett Silvertips player Kyle Beach during the squad's Stanley Cup championship run in 2010. Blackhawks GM Stan Bowman and a key front office associate resigned in the investigative report's aftermath, as did former Chicago coach Joel Quenneville from his new position with the Florida Panthers.

And right now, just when things seemingly couldn't get worse, there's a junior hockey scandal playing out in Canada rocking every level of the sport all the way up to the NHL. It became public in May that Hockey Canada — a federally funded entity overseeing amateur hockey in that country — had settled a $3.55 million lawsuit brought by a woman claiming she was gang-raped in June 2018 by eight members of Team Canada's gold medal squad from that year's World Junior Hockey Championships.

The alleged crime occurred in a hotel room after a Hockey Canada function in London, Ontario.