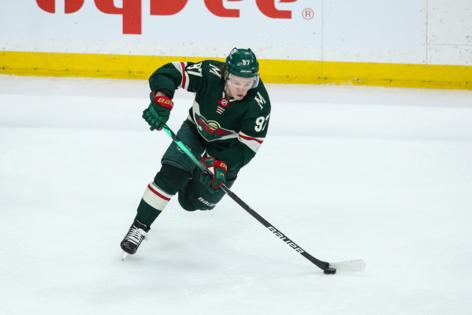 MINNEAPOLIS — The Wild's Kirill Kaprizov is expected to arrive in Minnesota later Tuesday, a source confirmed, a return that would clear up weeks-long speculation about whether the Russian star would be able to get back for next season.

Questions about Kaprizov's whereabouts and ability to travel to the United States intensified last month leading into the NHL draft after a report out of Russia said the forward traveled to the U.S. in the aftermath of Flyers prospect Ivan Fedotov getting taken to a military base in Russia because his name was linked to fraudulent military identification.

Wild general manager Bill Guerin went on to deny that report, telling reporters Kaprizov was in Russia with friends and family and "doing fine."

This uncertainty surrounding Kaprizov and other Russian NHLers, 57 of whom skated in the league during the last regular season, heightened at a time when the war in Ukraine continues.

NHL commissioner Gary Bettman said at the draft it probably wasn't a good idea for the league or its teams to get involved in the politics of what's happening in Russia.

"The Russian players that still reside in Russia need to make sure they're making the best possible decisions for themselves and their families," Bettman said last month.

Kaprizov is coming off the best individual season in franchise history after setting team records in goals (47), assists (61) and points (108).

He ranked fifth in NHL scoring, becoming the Wild's first 100-point producer, and the left winger added seven goals and an assist in the playoffs before the Wild was eliminated from the first round by the Blues in six games. The 25-year-old also finished seventh in NHL MVP voting.

A past Calder Trophy winner as the league's top rookie in 2021, Kaprizov signed a five-year, $45 million contract last September.