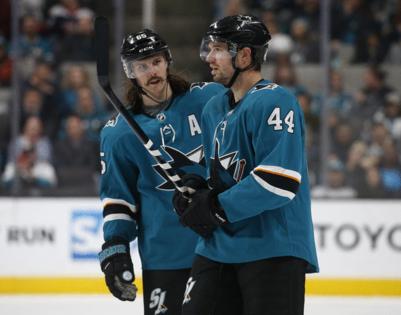 Perhaps Quinn’s most important job will be trying to maximize the talents of the numerous veteran holdovers from last season’s team that went 32-37-13.

Still, a first-year coach can breathe new life into a roster.

Seven years ago after Pete DeBoer replaced Todd McLellan, Brent Burns went from 60 to 75 points and played more than two minutes per game. Tomas Hertl went from 31 to 46 points and evolved into a better two-way player, and a then-36-year-old Joe Thornton became the Sharks’ leading scorer with 82 points in 82 games.

That 2015-16 Sharks team went to the Stanley Cup Final after missing the playoffs the year before.

No one should expect the same turnaround this upcoming season from the Sharks, who have missed the playoffs for three consecutive years. Still, they can get a lot closer to becoming a contender if several key players return to form.

Here are five Sharks players who could benefit from the coaching change.

1. ERIK KARLSSON: It’s been said before, but the Sharks need to get more bang for their buck from Karlsson, who is entering the fourth year of his eight-year, $92 million contract. Over the last three seasons, Karlsson, as he’s battled injuries, has averaged 0.61 points per game, which ranks 21st among all defensemen who have played at least 130 games in that time.

The Sharks last season went to a more conservative forechecking system to help limit goals against. We’ll learn more about what Quinn has in mind for the Sharks as the weeks go on, but perhaps a more aggressive style can lead to increased scoring opportunities and a more dangerous Karlsson.

“I don’t understand much about hockey. We’re a football state down here,” the Sac and Fox Nation council member told the...Read More

Last week's opening of NHL free agency told us a whole lot about the direction the Kraken appear to be headed in the next few seasons.

In short, it's a revised three- to five-year plan to make the playoffs. Not quite "...Read More