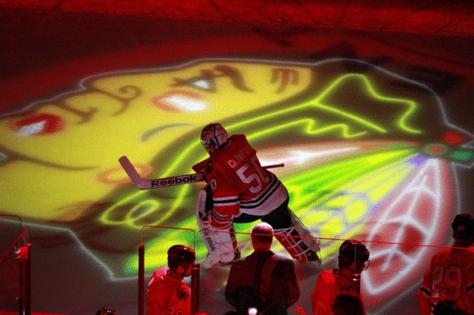 “I don’t understand much about hockey. We’re a football state down here,” the Sac and Fox Nation council member told the Chicago Tribune with a thick Oklahoma twang.

The Blackhawks have the same name as a local casino and clinic — named after tribal ancestor Black Hawk. Team representatives from Chicago, who claimed to want to help the Oklahoma community, might as well have been coming from the moon.

“We’re still talking about rural Oklahoma,” Hawks CEO Danny Wirtz said. “So a big corporation going down there, you can imagine there would be distrust. There’s a lot of history of distrust.”

The Sac and Fox took a leap of faith and heard them out. And earlier this month, those talks culminated into a tangible symbol of an alliance: a helicopter.

On July 9, Wirtz, vice president of community Sara Guderyahn and defenseman Connor Murphy traveled to Stroud, Okla., to help the Sac and Fox dedicate a decommissioned UH-60A Black Hawk helicopter during an annual powwow at the tribe’s veteran’s memorial.

The Hawks used their money and connections with the U.S. Army to facilitate what had been a 10-year quest for the Sac and Fox.

“Man, I tell you, the feeling was just awesome,” Williamson said. “To watch them old veterans just smile. They put a smile on them guys’ face.”

“Black Hawk was a member of the Thunder Clan,” he said. “That comes from the air.”

Last week's opening of NHL free agency told us a whole lot about the direction the Kraken appear to be headed in the next few seasons.

In short, it's a revised three- to five-year plan to make the playoffs. Not quite "...Read More

Wallinder was a 2020 second-round draft pick, so timing was not on his ...Read More

The Berlin Wall came down on Nov. 9, 1989. This was the beginning of the end for the Soviet Union. Eastern Europe was mostly freed from the "Iron Curtain'' imposed by Russia after World War II by the early '90s.