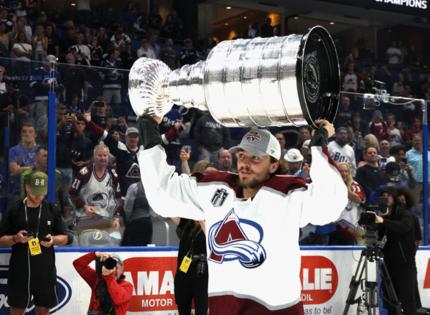 Nazem Kadri can buy a bigger house somewhere else in the NHL, but he’ll never have a better home than what he found here in Denver, where folks wrapped him in love.

So rather than slam the door on Kadri, as his eyes wandered around the league for a huge pay day, new Avalanche general manager Chris MacFarland wisely left the lights on for him, just in case Kadri decides love might actually be worth more than money.

“Never say never,” McFarland said shortly before the dinner hour on Wednesday, after NHL players and teams pigged out on the all-day buffet that is free agency.

After a very good session of high stakes wheeling and dealing by MacFarland, when the Avalanche smartly retained glue guys Artturi Lehknonen and Josh Manson, the cold, hard math dictated by a flat salary cap of $82.5 million made it hard to see any way Colorado could also pay absolute top dollar for Kadri.

As MacFarland readily acknowledged: “We’ve got nothing on the front burner.”

But there was just enough wiggle room to keep hope alive, so MacFarland calmly showed why he’s fully qualified to take over the G.M. chair from Joe Sakic as the lead architect of the Avalanche roster.

Now, by the time you’re reading these words, Kadri might have already be issuing a moving van traveling orders to whatever NHL city is willing to dazzle him with dollars to serve as a leader of a team inferior to the newly crowned Stanley Cup champions.

Hey, we all want to get paid, right? That’s the American dream, and here’s wishing all the best for the Kadri family, wherever the pursuit of their dreams might take them.

But at any price, will Kadri ever replicate the sheer joy of sticking a hat trick in the face of the St. Louis Blues or scoring an overtime goal against Tampa Bay in the Stanley Cup Final?

He's taken matters into his own hands a bit over the last two ...Read More

In the course of a 30-minute interview Wednesday, Brent Burns talked about his Texas ranch, blowing up the transmission in his truck, eating axis deer meat, avoiding push-up contests with Rod Brind’Amour and why he grows...Read More

BRANDON, Fla. — Once the Lightning realized in the days leading up to free agency that they wouldn’t be able to retain forward Ondrej Palat and defenseman Jan Rutta, the team worked quickly to reshape its roster.

Cam Talbot is excited and looking forward to stepping into a lineup with a young core and some splashy new additions.

But what Talbot doesn't feel is animosity after the Wild traded him to Ottawa, a line in the sand that ...Read More

CHICAGO — Chicago Blackhawks general manager Kyle Davidson said he gave team leaders Patrick Kane and Jonathan Toews a heads up about some “real tough decisions,” though he didn’t give them foreknowledge about the ...Read More

Mike Sullivan is thrilled the Penguins re-signed Evgeni Malkin to a new four-year, $24.4 million contract late Tuesday, keeping Malkin from hitting free agency at noon Wednesday. All along, Sullivan has pushed for the team...Read More