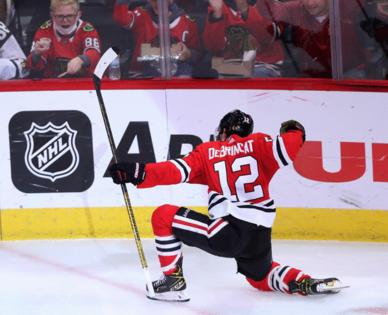 CHICAGO — The Chicago Blackhawks may have a better idea of their starting lineup for the 2025-26 season opener than for the Oct. 12 opener at the Colorado Avalanche.

Perhaps a bit of hyperbole, but with any luck, 2022 first-round picks Kevin Korchinski, Frank Nazar and Sam Rinzel will all be in that future lineup.

“Coming into today (Thursday), if I figured we would add Kevin Korchinski, Sam Rinzel and Frank Nazar I wouldn’t have believed you,” general manager Kyle Davidson said on draft night in Montreal. “Sitting where we are right now with the prospects we just picked up I’m pretty damn happy.”

But to get them, the Hawks had to trade fan favorite Alex DeBrincat (Ottawa Senators) and Kirby Dach (Canadiens), kicking off what could be a mass exodus of the current roster.

“It’s difficult to trade any young player, especially young contributors like we did today is not easy,” Davidson said.

With their leading scorer in DeBrincat gone, there’s little reason to bring back linemate Dylan Strome, a restricted free agent with arbitration rights — or fellow RFA Dominik Kubalík, for that matter. Patrick Kane and Jonathan Toews could be weighing whether they want to stick around for the tear-down.

If last season’s 28-42-12 campaign was a drain on the three-time Stanley Cup-winning duo, this season could leave them feeling empty.

Anyone else is fair game, particularly veterans (Tyler Johnson? Jake McCabe?) Davidson could ship off to contenders before next year’s trade deadline.

“Going through a rebuild is not fun. Doing things you have to do to get to where you want to go is not fun,” Davidson said. “So there’s going to be tough days like this where you see familiar faces and faces that we in management and the fans know and love, but it’s necessary.”

“It’s all about the process. It’s our job to make sure that the assets that we bring in make the decision the right one and make it justified.”

SEATTLE — For the Seattle Kraken, their inaugural season was all about the wonderment of having an actual NHL team in town, playing in a brand-spanking-new arena.

It was a vibe. It was a novelty. It was a honeymoon.

PITTSBURGH — As reporters gathered around Evgeni Malkin's dressing room stall at the UPMC Lemieux Sports Complex for the first time since pandemic restrictions were lifted, the Penguins center was clearly ready. Once he ...Read More