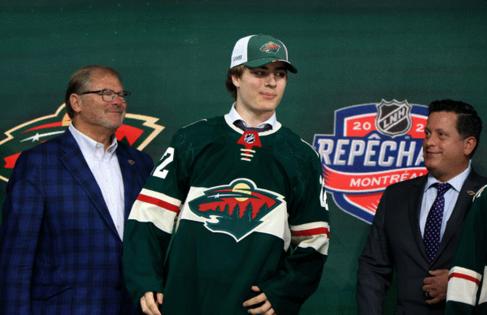 MONTREAL — Liam Ohgren, a left winger from Sweden, was the Wild's first pick in the NHL draft on Thursday night at Bell Centre.

Ohgren, who played for Djurgarden in the Swedish junior league, was the 19th overall pick.

The Wild also has the 24th selection.

"We'll probably see him over here in two years," Wild General Manager Bill Guerin said. "He has a lot of great character, competes really hard, a good two-way player. Our scouts really like him a lot."

PHILADELPHIA — After the Chicago Blackhawks named Jaime Faulkner their president of business operations on Dec. 16, 2020, a flower arrangement was delivered to her. The sender? The first woman to ever be hired to that ...Read More

SAN JOSE, Calif. – The NHL’s Global Series games in the Czech Republic next week will go on as planned – with Russian players included.

Jordan Greenway was on the ice Tuesday morning, skating with the first group at the Wild's practice facility in St. Paul. But it's unknown when he will appear in a game.

Will he miss a week to start the season? Two weeks?...Read More

The predominant theme for the Penguins this offseason was continuity. Sticking with the core despite Sidney Crosby, Evgeni Malkin and Kris Letang now closer to 40 than 30. Returning capable wings such as Bryan Rust and ...Read More

SAN JOSE, Calif. – The Zamboni at the Sharks’ main practice rink was still resurfacing the ice and the team’s scheduled scrimmage remained about 20 minutes away when Kevin Labanc – the first player out of the ...Read More