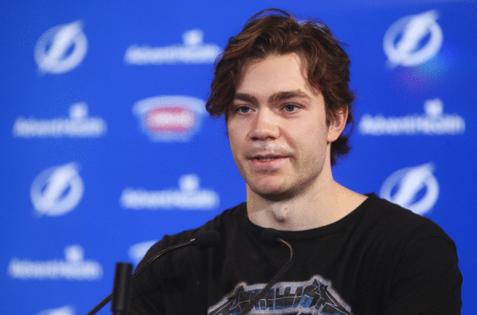 The leading goal scorer the previous two postseasons tried to return from a torn right quad muscle he sustained in Game 7 of the first-round series with Toronto. But after playing in the first two games of the Cup final against Colorado — and logging just one shot on goal — it was clear that the injury was hindering Point too much.

He couldn’t be the player he needed to be to help the Lightning.

“A lot of guys this time are playing through injury,” Point said Tuesday morning as the Lightning conducted end-of-season interviews. ”I’ve had tears in the past and you can still find your stride and you can play and can still be effective, but this one was different. Just the power wasn’t there and the tight turns and all that kind of stuff that you need to be able to do to be effective and especially in the final, it just wasn’t there.”

“It wasn’t a matter of playing through it or whatever,” Point added. “It was just a matter of Colorado was a good team, and me and the coaches and everyone felt like I wasn’t going to be able to be good enough out there to give us the best chance to win. So that’s kind of what the decision was.”

Point might have been the Lightning’s top player in the postseason before the injury. He was tasked with shutting down Hart Trophy winner Auston Matthews and scored the winning goal facing elimination in Game 6 before he went to the ice awkwardly in Game 7 in Toronto.

“You just want the control, right?” Point said. “You’re out of it, so you’re just watching. But watching the guys, I had confidence. There’s times where you get nervous, but I just had such a confidence in our group.”

Lightning general manager Julien BriseBois, who disclosed Point’s injury as well as a litany of others that players withstood through the postseason, said Point will be recovered from the injury in a matter of weeks and should be fine for the beginning of next season.

“He’s obviously a hell of a player and a big part of our team,” forward Nikita Kucherov said. “Seeing him not be able to play, I know how hard it is for him. I’ve been in that position in the (regular) season, but especially when you’re in the playoffs and you can’t help your team, it’s tough.”

BriseBois read similarly long injury reports at the end of the past two seasons, but the pain was easier to handle after winning the Stanley Cup.

Among the most serious injuries, center Anthony Cirelli sustained a AC joint sprain in his right shoulder during the Eastern Conference final and dislocated his right shoulder in Game 4 of the final, preventing him from taking faceoffs for the remainder of the series. He was scheduled to see a specialist Tuesday to find out if he will need offseason surgery.

Forward Brandon Hagel played with a fractured foot after he blocked a shot in Game 2 of the second-round series win over Florida. Forward Nick Paul had a shoulder AC joint sprain from the conference final and an MCL knee sprain in the final.

Kucherov dealt with an MCL sprain in his knee from the final, presumably from the cross-check he took from Colorado’s Devon Toews in Game 3. Forward Corey Perry also sustained a shoulder AC joint sprain against the Rangers, and forward Pierre-Edouard Bellemare entered the postseason with a meniscus injury that he will require arthroscopic surgery in the coming days.

Paul, a trade deadline acquisition who played in his first postseason, said that players fed off each other seeing teammates battle through injuries.

“It just shows how bad guys want to win on this team,” Paul said. “They’re all banged up, a couple of surgeries going on, they’re playing through that. So when someone’s strapping up and they’re giving it all they can, you can definitely build off that. Like I said all the time, it’s just a bunch of warriors on this team.”