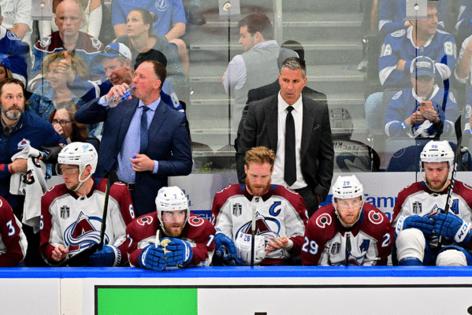 With the exception of Game 4, where things got cuckoo immediately and largely stayed there, the Stanley Cup Final have been dictated by the team — Avalanche or Lightning — that controlled the first 20 minutes.

Game 1: The Gabe Landeskog and Val Nichushkin Show set the tone for the party, firing the hosts to a 3-1 lead at the first intermission, and a 4-3 Avs win in overtime.

How bad you want it, Landy?

Game 3: Tampa Bay’s Ondrej Palat broke a 1-1 deadlock with five minutes left in the first period, setting the stage for a four-goal Lightning onslaught in the second stanza and Darcy Kuemper getting pulled during a 6-2 Tampa rout.

Game 5: Lightning D-man Jan Rutta snapped a scoreless tie late in the first, firing a shot from the right dot that Kuemper let bounce off his glove and into the back of the net for a 1-0 Lightning lead. On a night when goals were precious, Tampa cashed in on a handful of Avs errors for a 3-2 victory.

How bad you want it, Darcy?

How bad do you want the Stanley Cup? The parade? All of it?

The Lightning are stubborn royalty, clinging to Lord Stanley the way a dangling cat clings to a tree branch.