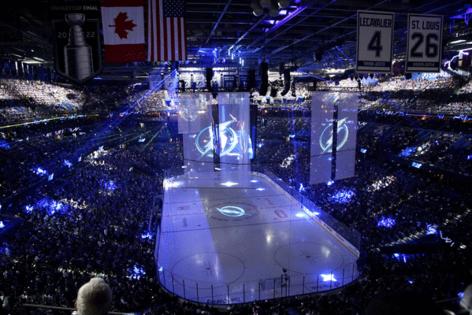 That kind of playoff experience is unprecedented in today’s game. The Lightning have almost an entire regular season of postseason games under their belt and hope to get the opportunity to play yet another after this one for the chance to make history.

Down the stretch, coach Jon Cooper is still learning about his team’s resolve in battling back from adversity. Facing elimination, they played one of their most determined games of the playoffs in a Game 5 win Friday at Ball Arena in Denver.

“I do have to marvel at what’s gone on and how many times you can be kicked and get back off the mat,” Cooper said Saturday morning before the team’s charter back to Tampa. “It’s not always the game situations. It’s the injuries and the blocked shots and the gamesmanship and all those things that kind of just needle you to go away. Just like little gnats, like, ‘OK, go. It’s OK. It’s OK if you back down now. You’ve won. You’ve done it.’

“And that’s why I think teams don’t keep repeating, because it’s easy to walk away. These guys won’t do it, and it’s something to marvel.”

The Lightning still face a tough climb in their drive for a third straight title, trailing the Avalanche three games to two in the series. All their Game 5 win bought them was another game in front of their home crowd.

“You’ve just got to work hard,” Lightning forward Pat Maroon said after Friday’s game. ”There is a huge challenge in front of us. It’s an exciting challenge. How are you going to embrace it? That’s it. Just because we have home ice doesn’t mean (anything), to be honest. We’ve still got to work.”

But game to game, this team has done a remarkable job over the past three postseasons of remaining even keel and immersed in the moment. They won’t expect anything from playing on home ice other than having another chance to play another day.

“You don’t know how you’re going to get there, but for us, our focus can’t change. Our approach going into (Game 6) can’t change (Sunday) just because we’re going home. Part of our job as a coaching staff is to make sure everybody’s dialed in there and we’re not looking too far ahead.”

While this is the first time they Lightning have had to climb out of a 3-1 hole over the past three postseasons, Friday’s victory was their third of this playoff run while facing elimination (They came back from a 3-2 deficit to beat the Maple Leafs in the first round, including Game 7 on the road).

“This is definitely a lot more adversity, a little bit more situations with our back against the wall,” defenseman Ryan McDonagh said. “But testing our character, I know that’s been tested enough over the years and even during the season this year. So, there’s no questioning that.

“And testing our ability to trust the system, I think we’ve been tested there throughout the year, too, and in years past. We’ve proved to ourselves if we do our jobs out there and we trust the coaching staff, it gives us a good chance to win.”

The Lightning always can lean on their experience, and having been in the position the Avalanche are in — navigating the emotional and physical waves of trying to close out a Cup final — is valuable, Cooper said. The Lightning closed out the Canadiens in five games last season and beat the Stars in six two years ago.

“I think there’s no doubt we’re better-equipped in these situations, because you kind of feel (like) you put yourself in the shoes of the other teams, too, and what they must be thinking, what you’re thinking when you’re in these situations and how games played out, how situations ran,” Cooper said.

“It’s experience. You can go to driver’s school and you can write the test and get an A, but it doesn’t mean when you jump behind the wheel you’re a hell of a driver, and experience matters. And I think for us, this experience for our team and our staff matters and, hey, it’s not guaranteeing we’re going to win (in Game 6 Sunday). I think our mindset and being in these situations before makes our preparation better.”