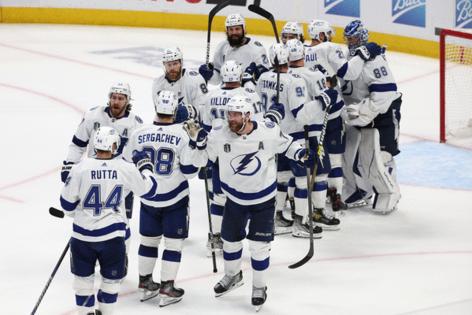 Palat always seems to find himself in the right spots, and with Tampa Bay facing elimination Friday night in Game 5 of the Stanley Cup Final, the Lightning forward came through in the clutch.

Palat broke a 2-all tie with his 11th goal of the postseason with 6:22 remaining in the third period, giving the Lightning a 3-2 win over the Avalanche at Ball Arena.

The Lightning still have a tall mountain to climb, but their drive toward three straight is still alive. Their Game 5 victory wasn’t their best, but it was what they needed to survive to play another day.

The Lightning refused to let the game get away from them early — as had happened in the first two games in Colorado — and sent a Ball Arena crowd looking to celebrate a Cup championship home unsatisfied.

Palat then took a feed from Lightning defenseman Victor Hedman, who drew attention drifting to the goal line, needling a pass through traffic to a wide-open Palat between the circles.

The Lightning’s special teams came through, as a man advantage that was 1 for 16 in the series broke through with a goal at the most important time.

Nikita Kucherov scored his first goal of the series on a 4-on-3 power play, ending a methodical man advantage by rifling a one-timer from the high slot past Colorado goaltender Darcy Kuemper.

The Avalanche were playing a stout penalty kill, consistently blocking Lightning shots attempts. It wasn’t until Steven Stamkos bluffed a shot from the left circle, then fed Kucherov up top where Kucherov launched a one-timer through Corey Perry’s screen off the post and into the back of the net.

The Lightning desperately needed a special teams spark after manufacturing just one shot on goal on two previous power plays, especially after Valeri Nichushkin tied the score earlier in the period.

The Lightning got a boost from an unlikely source as defenseman Jan Rutta opened scoring with his third career playoff goal in 48 career games.

Rutta, a light-scoring stay-at-home defenseman who was a healthy scratch for most of the Lightning’s first-round playoff series win over Toronto, skated through the neutral zone after taking a cross-ice feed from Perry and had an open shot approaching the top of the right circle.

Rutta rifled a 95-mph slap shot from near the boards, beating Kuemper under his glove for his first postseason goal since Game 3 of last season’s Cup final against Montreal, a stretch of 10 playoff games.