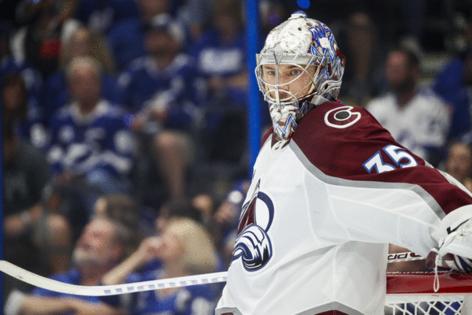 After he stopped 37 shots in Wednesday’s Game 4 of the Stanley Cup Final, Kuemper received the secondary assist on Nazem Kadri’s overtime goal, capping his night of redemption.

After he allowed five goals on 22 shots and watched the final 28 minutes from the bench in Monday’s Game 3 loss, Kuemper was rock solid except for Victor Hedman’s back-handed goal in the second period. That was the only blemish on Kuemper’s scorecard as the Avalanche moved into position to clinch the Cup on home ice Friday night.

The Lightning had 39 shots, the most by an Avalanche opponent this postseason, including 17 first-period shots, one more than its entire Game 2 total.

“He was great,” teammate Nathan MacKinnon said of Kuemper. “I thought, even in Game 3, he had some bad luck with some of those goals that went in and we hung him out to dry on a few as well. (In Game 4), that was the Kuemps we knew, no doubt.”

MacKinnon and his teammates didn’t have any doubts and neither did coach Jared Bednar.

Kuemper said he and Bednar had “a good talk (Tuesday) and he said there was no doubt I was going back in and wanted me to be loose and play my game and that’s what I tried to do. I knew the guys had my back.”

Kuemper solved Bednar’s biggest problem by not being a problem.

“Our team believes in him and I believe in him,” Bednar said.