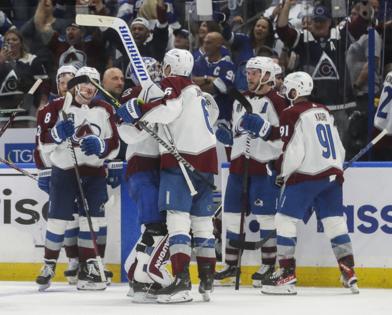 Luck was on a coffee break when Andrew Cogliano, 177 pounds of pure guts, 5-foot-10 with 6-foot-5 spunk, refused to budge from the crease, even though the Avalanche forward had Lightning defender Jan Rutta — all 6-2, 211 pounds of him — draped all over his back.

Luck had her hands off the wheel when Avs goalie Darcy Kuemper caught Tampa Bay coach Jon Cooper in a badly-timed line change some 12:00 into overtime. And when Nazem Kadri boat raced the two Lightning defenders who were stationed between him and the goal for the game-winner a few seconds later.

“(A) great, heads-up play, right?” Colorado coach Jared Bednar told reporters when asked about the Amen at Amalie Arena, Kuemper-to-Artturi Lehkonen-to-Kadri, a bang-bang overtime sequence that brought the Avs home for Game 5 of the Stanley Cup Final with a 3-1 series lead.

“Trying to play fast, Lehkonen does the early work to get open, opens up on the weak side of the ice, Kuemper hits him with it … Kuemper to Lehky, Lehky to Naz, trying to move the puck up the ice as quickly as you can to create something.”

Luck is a loser’s crutch. It’s a whiner’s recrimination, subjugation’s gasping alibi, the last crooked finger pointed by hubris before it falls, face-first, to the canvas. The Avs scored three goals Wednesday on the sludge masquerading as Tampa’s ice. None of them were, to put it mildly, what you’d call conventional.

TAMPA, Fla. — Through all the experience this Lightning team has drawn from, all the times they have rallied from deficits (in games and series) this postseason, they now face their toughest challenge.

FORT WORTH, Texas — On Wednesday morning, the Dallas Stars did what this franchise does better than any other not only in the National Hockey League, but also all of sports.

No franchise can hire a new coach like the ...Read More

MIAMI — The Florida Panthers are on the verge of moving on from Andrew Brunette and bringing in a more established, experienced coach to lead their chase for a Stanley Cup.

Paul Maurice, whose 775 wins are the seventh ...Read More

Down two goals, he could have suddenly noticed the top power-play guys are on the ice in front of him. He's sneaking glances toward the bench, waiting for that wave...Read More