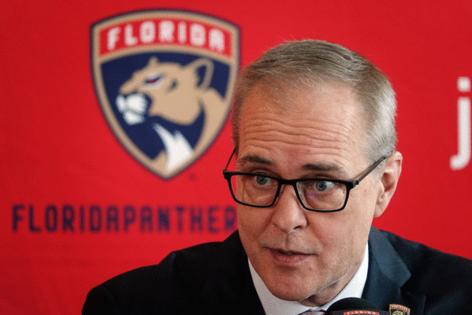 If you’re a Florida Panthers fan, if you waited a quarter-century for success like last season, you trust general manager Bill Zito pushed another right button and made another proper decision Thursday in introducing Paul Maurice as coach.

This wasn’t the easy or even the popular move for Zito. That would have been bringing back interim coach Andrew Brunette to build on last season. No one would have said a word, much less raised a question.

But Zito is trying to do what he’s done a lot over the past two years, which means to take someone other teams didn’t necessarily covet, maybe a name he sees as special, and make the perfect fit for the Panthers.

That’s the word he kept returning to in introducing Maurice.

“This was the man to be the real fit, just the right fit, to take us into the challenges moving forward and ultimately to our goal,’’ Zito said.

When you add it all up, that’s why Maurice is in and Brunette is out right now. Maurice has coached nearly three decades to Brunette’s one season. He says the first time he was fired, he turned to the man telling him, Carolina Hurricanes’ general manager Jim Rutherford, “Thank god, I’m tired. They need a new voice.”

He took a job in Russia for two years for one simple reason: “To learn,’’ he says.

He has an expression for playoff hockey, one his players will get to know. “You’ve got to get down in the mud,’’ he said.

So he’s 55 and been around the block a few times, even if the one question about him remains the one about the Panthers themselves: Can he win the Stanley Cup? He’s been to the Stanley Cup Final once and the conference finals twice.

He made the playoffs the previous four seasons before resigning in Winnipeg in January. He knows exactly what the Panthers discovered against Washington and especially Tampa Bay this spring, too.

TAMPA, Fla. — Through all the experience this Lightning team has drawn from, all the times they have rallied from deficits (in games and series) this postseason, they now face their toughest challenge.

FORT WORTH, Texas — On Wednesday morning, the Dallas Stars did what this franchise does better than any other not only in the National Hockey League, but also all of sports.

No franchise can hire a new coach like the ...Read More

MIAMI — The Florida Panthers are on the verge of moving on from Andrew Brunette and bringing in a more established, experienced coach to lead their chase for a Stanley Cup.

Paul Maurice, whose 775 wins are the seventh ...Read More

Down two goals, he could have suddenly noticed the top power-play guys are on the ice in front of him. He's sneaking glances toward the bench, waiting for that wave...Read More

TAMPA, Fla. — If faith can win you a hockey game, then the Lightning may have already pulled even in the Stanley Cup final.

If trust can assuage your fears, then another deficit against another hungry team doesn’t ...Read More