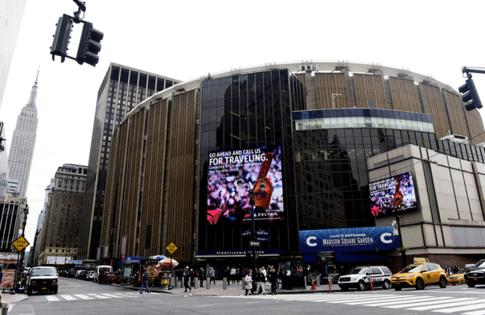 A hot-tempered Rangers fan from Staten Island was banned from Madison Square Garden for life Friday after he cold-clocked a Tampa Bay Lightning fan from Massachusetts — then punched a good Samaritan who tried to stop him from skating off, police and stadium officials said.

Wearing a red shirt with Artemi Panarin’s No. 10 emblazoned on the back, James Anastasio had just watched the Rangers fall to the Tampa Bay Lightning, 3-1, in Game 5 of the Eastern Conference finals Thursday night.

He was exiting the stadium at about 10:45 p.m. when he was captured on video turning and sucker-punching a 26-year-old man in a Tampa Bay jersey walking behind him. The Lightning fan fell backward, unconscious and surrounded by dozens of stunned hockey fans.

“He’s dead. He died!” one man can be heard on the recording as Rangers fans stopped to help the floored victim and screamed for security.

The video went viral when it was posted on social media.

A good Samaritan who saw the attack followed Anastasio in an attempt to stop him, but the Staten Island brawler punched him in the face too, leaving him with a minor injury, cops said.

Police were called to the scene and charged Anastasio with two counts of assault and two counts of harassment. He was expected to be arraigned in Manhattan Criminal Court Friday.

“Last night, an abhorrent assault took place against a Tampa Bay fan at the conclusion of the game — followed by a second assault against an individual who bravely intervened,” Ravitz said.

Anastasio has been banned from the Garden and all MSG venues for life, the spokeswoman added.

“All guests — no matter what team they support — should feel safe and respected in The Garden. This has and always will be our policy,” she said.

It was not immediately clear if the Lightning fan had said anything to Anastasio before he was hit.

Anastasio wasn’t the only one brawling following the Rangers’ loss. Both teams traded punches at the end of the third period when the Lightning capped off their win with a Brandon Hagel empty-net goal.

The Lightning now leads the conference 3-2. Game 6 is scheduled for Saturday.