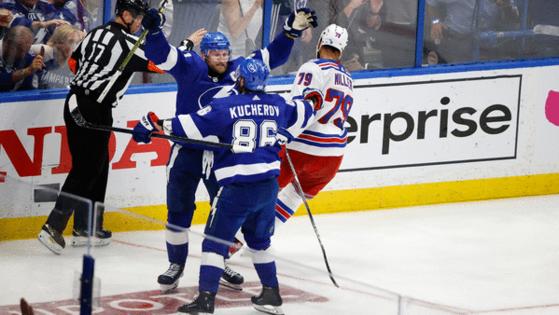 It is unhappy, but never exasperated. It is frustrated, but never panics. It is a hockey team that can look slow and befuddled at the start of a series, and then calmly reverse its fortunes in 48 hours.

They weren’t quite facing the abyss in the Eastern Conference final against the New York Rangers, but they were close enough to feel a cool breeze at their backs. They responded by winning a thriller in Game 3, and then romping to a 4-1 victory in Game 4 on Tuesday night.

Just like that, the series is tied and is now a best-of-three affair.

“We were just making some poor decisions, and if you want to move on you have to tighten that stuff up. And we have,” coach Jon Cooper said. “Are we perfect? No. But are we giving ourselves a chance? We are.”

That stuff doesn’t happen by accident. And it isn’t the first time the Lightning have done it. They also struggled 5-on-5 in the first two games of the Toronto series, getting outscored 5-2 before coming back to outscore the Maple Leafs the rest of the way.

It’s almost as if the Lightning are predators taking the measure of their prey before figuring out the easiest path to evisceration.