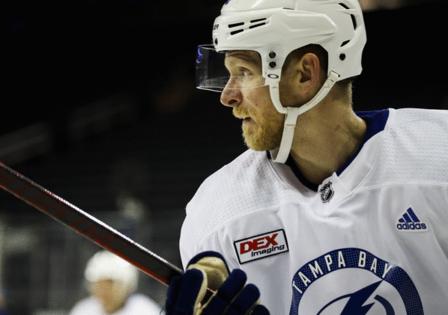 By now, the Lightning have won enough, lost enough and evolved enough that players do not need some Knute Rockne version of a pregame speech to send them screaming into the night.

Now he was telling his Tampa Bay teammates what those experiences were like. How frustrating and exhausting it was to play against the Lightning when they were fully committed to their system.

He didn’t need to connect the dots, but the inference was clear. The Lightning were not giving the same kind of effort against Toronto.

A few days later, the Lightning had eliminated the Maple Leafs.

“You try to read the room. You try to get a perspective on how you can talk to them,” Perry said. “It’s not that you’re yelling at anyone, but you’re figuring out your tone of voice and how you want to say what needs to be said. You know, we’re all brothers. And we’re going to have differences, but you begin to see how guys react in certain ways. You’re just trying to be yourself.

“I’m a little different away from the rink. I’m a lot quieter away from here. But I’m comfortable with these guys in the dressing room, and I can say what I want to say.”

So who will say something before Game 2 on Friday against the Rangers in the Eastern Conference final? Who will stand up and say the things that happened throughout a 6-2 loss in Game 1 was unacceptable?