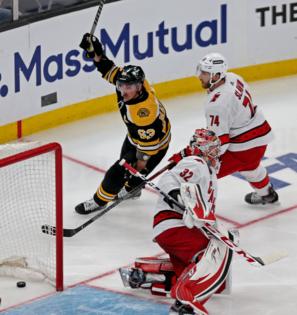 BOSTON — As we still await word of a possible contract extension for GM Don Sweeney and the future of coach Bruce Cassidy, the Bruins offseason got off to a bumpy start.

The Bruins announced Friday evening that star left wing Brad Marchand underwent successful hip arthroscopy and labral repairs on both hips. Recovery time is expected to be approximately six months, which would keep him out of the Bruins lineup until around Thanksgiving, traditionally a time when teams are gauging whether or not they are an actual contender.

Surgery was performed in New York by Dr. Bryan Kelly at the Hospital for Special Surgery on Friday, according to the release.

The news was not entirely unexpected, as Sweeney had said in his end-of-season presser last week that a hip procedure was a possibility. But in an offseason that is already filled with uncertainty, this is not the best news for the Bruins, who are also waiting to hear if their captain and mainstay of 18 years, Patrice Bergeron, will continue playing. Whether this news is another factor that would push Bergeron toward retirement remains to be seen.

Marchand had what was for him an up-and-down season. He led the Bruins in scoring in both the regular season and in their seven-game first-round series against the Carolina Hurricanes. But he incurred two suspensions, the second of which kept him out for six games in February. He had also suffered a shoulder injury in January when he was hit by Washington’s Garnet Hathaway, but he was able to play through that.

When he returned from the suspension that he received for punching and high-sticking Pittsburgh goalie Tristan Jarry, Marchand struggled to produce at the same elite rate. Down the stretch, he went 11 games without a goal. In the playoffs, Marchand again picked up the pace, leading the Bruins in scoring with 4-7-11 totals in the seven games against the Canes.

In the first half of the season, in which the Bruins were incorporating a handful of new players into their lineup, Marchand led the way in keeping the team afloat. Despite the late tail-off, he led the team with 32-48-80 totals. Now they’ll need early contributions from someone else.

If Bergeron does not return and Marchand misses the first two months of the season, just making the playoffs could be a challenge for the Bruins.