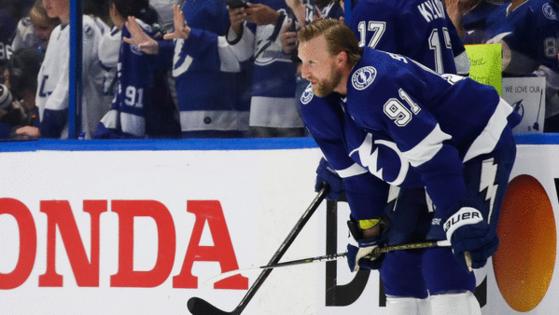 TAMPA, Fla. — With their second-round sweep of the Panthers, the Lightning earned themselves some time off before the start of the Eastern Conference final, which likely will open Monday or Wednesday in Raleigh or New York.

The Lightning closed out the Panthers on Monday and have used the time off to heal from physical series against Florida and Toronto. But when you’re playing as well as Tampa Bay has been, having won six straight, returning from the brink of elimination against the Leafs to sweeping the league’s top team in the Panthers, you want to keep going.

“Our group needed (rest) regardless of what happens,” Lightning coach Jon Cooper said. “We needed it, we needed to heal. We’ve gone through a couple of wars here in our series, so it’s pivotal for us to have this break now.

“The downside of it is no matter what you do in practice, you’re not even going to come close to emulating what goes on in a playoff game: the intensity, the on-top, the compete. So you do lose that. You just hope you don’t lose your edge. We’ve got enough of a veteran group here, we should be able to get through that.”

The team never has had so much time before a playoff series. To find a Lightning squad that’s had as large of a gap, you have to go back to the 2010-11 postseason, when Tampa Bay had nine days between a sweep of Washington in the second round to the opening of the Eastern Conference final against Boston, a series the Lightning lost in seven games.

“I just remember it was a lot of the same,” Lightning captain Steven Stamkos said of that instance. “You can only do so many drills and practice and stuff and try to mix it up with a little scrimmage and just keep the guys loose but focused. You’re not really expecting this much time off at this time of the year. You look at the positives. Guys can get some rest and recover and hopefully get as healthy as we can before we start the next round.”

Lightning assistant coach Jeff Halpern likened the time off to the team’s summer camp before the 2020 playoffs. Back then, coaches got advice from some major juniors coaches who had gaps between the end of the season and the CHL Memorial Cup.

“I don’t think there’s a roadmap for it,” Halpern said. “We’ve drawn on some of the experiences we had, especially a couple of years ago.”

The Lightning are coming off a series that was much more physical than the outcome would indicate. Tampa Bay averaged 20 blocked shots against Florida, and the games had their share of hard hitting.

The physical strain is different than postseasons past, Cooper said. In the 2020 bubble, the Lightning’s run began with a grueling, five-overtime win over Columbus. “We broke down after that as the playoffs went on,” Cooper said. So having the opportunity to heal and rest is valuable for this year’s squad.

“There were no real breaks, because we’re in the bubble and they were — and understandably so — game after game after game and back-to-backs, so it was really hard to recover,” Cooper said. “This is different and different injuries, and probably a little less wear and tear on this one. I don’t know how to describe the injuries, but stuff that our guys need to heal. We need rest.”

Coming out of the Panthers series, the Lightning took two days off and then practiced two days before Saturday’s day off. They are slated to practice again Sunday. Tampa Bay has several players from AHL Syracuse in town to give them the numbers to hold scrimmages to try to provide some simulation to games. Players like Brandon Hagel and Mikhail Sergachev haven’t practiced to give them time to rest.

“I think the biggest thing is your legs and the way you want to play,” Lightning center Anthony Cirelli said. “No one wants to come out here and start getting some bad habits, but I think just going out there and playing kind of where we left off, just kind of playing that up-pace game, and if you got to dump the puck in guys are dumping pucks in and forechecking. So just to have that aspect of the game and just going through that obviously helps.”

Stamkos noted that it’s been nice to be at home, especially since the regular season ended on the road and the first two playoff series began on the road. Defenseman Victor Hedman said there’s value in getting away from the rink to refresh mentally and physically.

“Especially for the body and the mind to kind of get away, I think it’s good, a little refresher, and we’re professional enough,” Hedman said. “We know what to expect come next week. So we’re excited about that opportunity and to see who we’re going to play. We are excited to get back into game action, obviously, but you’re not going to say no when you win four straight to get a few extra days.”