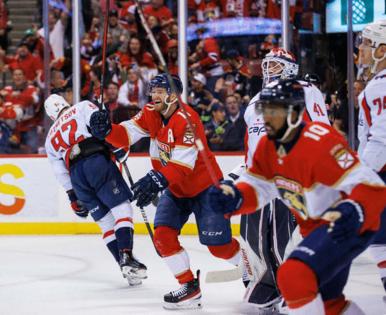 MIAMI — A few days had passed since the Florida Panthers’ record-setting season ended with a stunning sweep at the hands of the rival Tampa Bay Lightning and the Panthers couldn’t believe it.

“I woke up this morning thinking we were playing,” interim coach Andrew Brunette said Wednesday after arriving at FLA Live Arena on the day Florida could have been playing Game 5 of the second round.

It was stunning not even necessarily because it ended in Round 2 — the Lightning, after all, have won the last two Stanley Cups — but because of how quickly it did. Even though the Panthers made the second round of the Stanley Cup playoffs for the first time since 1996, they still haven’t won a game there since then after losing their second-round series 4-0 to Tampa Bay on Monday.

For now, it makes for complicated feelings about the 2021-22 NHL season. By every reasonable measure, it was one of the two best in Florida history. The Panthers set regular-season records for points, wins, points percentage and goals, and won only their second first-round series ever.

They also felt like it was a missed opportunity. Presidents’ Trophy winners are supposed to be true Cup contenders, and Florida couldn’t even win a game in the second round.

“I did not see this coming at all,” said 42-year-old forward Joe Thornton, who signed a one-year deal with the Panthers last year to chase a championship.

The good: Breakouts and bouncebacks

Really, just about everything in the regular season was good for Florida.

On offense, there were breakout performances everywhere: Star center Aleksander Barkov set a new career high with 39 goals, All-Star winger Jonathan Huberdeau set the NHL for assists by a left wing in a single season, forward Sam Reinhart justified the first-round pick the Panthers paid for him by averaging more than a point per game, rookie center Anton Lundell scored 44 points at just 20 and wingers Carter Verhaeghe, Anthony Duclair and Sam Bennett all scored at least 24 goals to form a formidable — and team-controlled — supporting cast.

On defense and in goal, there were bouncebacks: Star defenseman Aaron Ekblad didn’t miss a beat after fracturing his leg late last season and star goaltender Sergei Bobrovsky posted his best single-season save percentage since he joined Florida in 2019.