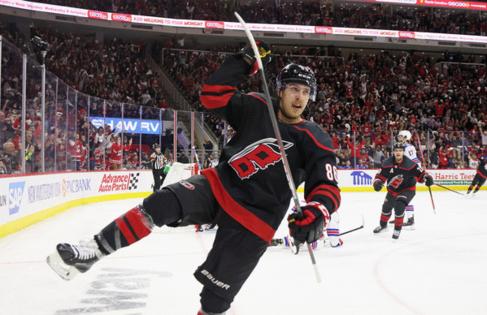 RALEIGH, N.C. — Sometimes, it truly is a game of inches. As it was when Sebastian Aho hit the crossbar. And Jesper Fast hit the post. And Aho hit the right post while standing alone in acres of open ice.

Then, once in a while, it’s a game of yards. Which is how far offsides Andrew Copp was when he scored what, momentarily, was the go-ahead goal for the New York Rangers.

From such margins, a game and even a season can change.

The Carolina Hurricanes successfully challenged Ryan Strome’s goal. Not long after, they scored their first power-play goal in more than 21 minutes of man-advantage time as things went from 2-1 the wrong way to 2-1 the right way, and it made all the difference Thursday night.

So instead of facing elimination, the Hurricanes will take a 3-1 win and go to New York on Saturday with a chance to close out the series and move on to face the waiting Tampa Bay Lightning — if they can finally win a game on the road.

They maintained their undefeated home record in this postseason not quite entirely because the Hurricanes spotted what linesman David Brisebois missed, but it was as easy to spot that sequence as a turning point as it was to spot Copp being late exiting the zone after Strome brought it across the blue line.

In the video room under the stands, deep in the Hurricanes’ dressing room, Chris Huffine and Michael Brown flagged the play as offsides immediately, before Strome gathered a loose puck at the left circle and beat Antti Raanta. The players on the ice had no idea at the time, but they were playing with house money. This was one video review that wasn’t replay lottery. It was a sure thing.

Whereas the Hurricanes’ power play had been anything but a sure thing throughout this entire series, going 0 for 12 since Game 6 of the first round, and even that was little more than a consolation goal in a loss where the misfiring power play had already sunk the Hurricanes. On their first opportunity of the evening, they needed only 22 seconds to whip the puck around from Tony DeAngelo to Seth Jarvis to Teuvo Teravainen to break the skid.

Throw in a Vincent Trocheck short-handed goal in the first period, the beneficiary of Jordan Staal’s steal from Jacob Trouba at one end and an improbable saucer pass from Staal at the other, and the Hurricanes’ special teams actually won them a game. Heaven forfend!

It was Trocheck’s first goal in seven games, and Andrei Svechnikov added his first in six, turning Adam Fox inside out in the neutral zone and beating Shesterkin with a backhand – appreciated by the crowd not only because of the circumstances but because it was exactly the kind of thing they’d been waiting to see from him, a game-breaking play by a game-breaking player.

In New York, the Madison Square Garden fans had serenaded Shesterkin with “Igor!” not only after big saves but after he finally gave up a goal, the rare consolation chant. There was nothing ironic about it Thursday; it was honest old-fashioned mocking. Of more concern for the Rangers: Shesterkin stayed down for a while after a second-period glove save from the splits, flexing his left leg.

Might be something. Might be nothing. But in a series this close, decided by both inches and yards, the smallest things can have an outsized impact.