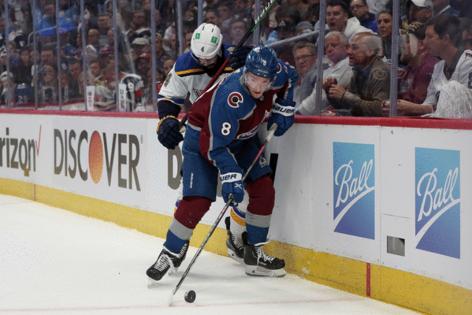 In trying to put a cosmic Game 5 collapse behind them, the Avalanche has at least one thing going for it:

Heading into a potential close-out Game 6 against the St. Louis Blues at The Enterprise Center on Friday night, the Avs are a perfect 4-0 on the road this postseason.

Of course, none of those wins were preceded by a historic meltdown with a trip to the Western Conference finals on the line — a 5-4 overtime loss that re-awakened ghosts of failed second round series past.

But Colorado coach Jared Bednar remained confident his team will be able to regroup, just as it did prior to Game 3 at The Enterprise Center.

The Avs swept both games at St. Louis after a poor showing in Game 2 at Ball Arena that evened the Western Conference semifinals 1-1. But St. Louis delivered a gut punch Wednesday night, as the Avs lost after going up 3-0 in a playoff game for the first time since their move to Colorado.

The Blues limited Colorado to just 11 shots in the second and third periods after the Avs had 18 in the opening frame.

“We were down on ourselves after Game 2. We did not play well. We needed to go into St. Louis and bring our best and be resilient and be mentally tough and get back to our game, and we did it,” Bednar told reporters at Denver International Airport on Thursday. “We did it twice and we did it very well.

“And now we’re obviously unhappy with last night’s game, especially the way it finished. We’ve got to regroup and do what we did in Games 3 and 4 there.”

If that doesn’t happen, Game 7 is Sunday night at Ball Arena. The Avs have lost five consecutive Game 7s — part of the reason they haven’t reached the Western Conference finals in 20 years.

After blowing the 3-0 lead the Avs were on the verge of victory thanks to a sensational end-to-end play from Nathan MacKinnon to give Colorado a 4-3 lead entering the final minute of regulation. Colorado was clearly the better team in the first half of the game and St. Louis dominated the final period.