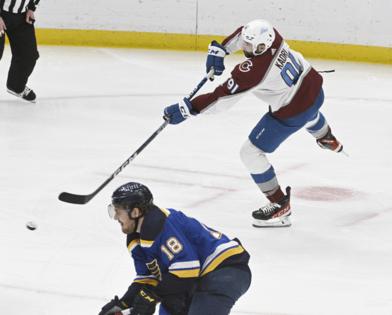 The NHL is awfully quick to throw the book at Nazem Kadri. But where the heck are they when some idiot throws an elbow at him?

Or a water bottle? Or something worse?

David Perron, Blues forward by day and tactless goon by night, should be suspended. Now. If not for Game 5 of Avs-Blues on Wednesday night at Ball Arena, when Colorado likely finishes what it started, then for the rest of this series.

“I don’t know if it was just about him,” Perron told reporters after the Avs’ 6-3 win when asked about Nazem Kadri, who notched three of those Colorado goals. “It was about creating a spark.”

Baloney. It was about knocking a guy into downstate Illinois on national television. It was about giving lowlifes red meat upon which to chew. It was about thuggery for thuggery’s sake, under the guise of revenge.

“Then they were up 3-1,” Perron continued, “and I just didn’t feel like we had enough pushback.”

Don’t you dare give that headhunting, classless toolshed another chance. Don’t let a coward compete for Lord Stanley’s Cup.

Perron didn’t just have two goals Monday. The left winger had a third as well. He wanted to injure Kadri. He wanted to enforce his own brand of fake machismo and bogus hockey justice on an innocent man.

When the next edition of Merriam-Webster’s dictionary comes out, the entry for “gutless” better darn well have Perron’s mug shot slapped next to the text.