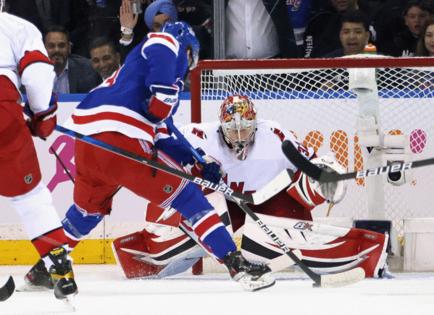 NEW YORK — Try as they might, the Carolina Hurricanes can’t win a road game in the playoffs.

The Canes have tried — five times. All have ended in losses.

Unbeaten at home in the playoffs, the Canes fell again outside of PNC Arena, taking a 4-1 beating from the New York Rangers on Tuesday in Game 4 of their second-round Stanley Cup playoff series at Madison Square Garden.

The series, now tied 2-2, goes back to Raleigh for Game 5 on Thursday.

The Canes again allowed a power-play goal on the road. They again failed to score on the power play. They again were outplayed in key parts of the game, relying too much on goalie Antti Raanta to try and bail them out.

There also was the matter of the big hit Jacob Trouba put on the Canes’ Max Domi. That, too, had a big impact on the game.

But the biggest problem for Carolina: Igor Shesterkin.

The Rangers’ goalie, so quick and instinctive, stymied the Canes with a lot of help from his defensive friends. Coming off his 43-save victory in Game 3, Shesterkin backed it up with another stellar performance and had Rangers fans chanting his name in the third.

Canes forward Teuvo Teravainen scored in the third period after Sebastian Aho won a board battle and made a nice setup pass. But that came after the Rangers had taken a 3-0 lead and took a quick release and perfectly placed top-shelf shot by Teravainen.

Andrew Copp had a goal and two assists, and Frank Vatrano and defenseman Adam Fox each a goal and assist for the Rangers. Copp’s goal came in the third period and pushed the lead to 4-1.

The Canes again started Raanta but didn’t give him as much help. Raanta also hurt himself in the second period when a Ryan Lindgren shot trickled through him and the puck stuffed in for a 3-0 lead by Mika Zibanejad.

There was much talk — most of it from Rangers forward Ryan Reaves — before Game 4 about settling a physical score with the Canes. That came after Game 3 ended with the Domi scuffling with Lindgren and defenseman Tony DeAngelo jawing with Rangers coach Gerard Gallant.

Reaves said he might “run some people” in Game 4. Instead, it was Trouba.

At 11:38 of the first period, Trouba lined up Domi along the boards and was about to deliver a crushing hit when Domi dipped his head and shoulders — likely escaping a serious injury.

Steven Lorentz immediately jumped Trouba after the hit on his linemate, but it proved to be more costly for the Canes than the Rangers. Lorentz was given an instigator penalty as well as a five-minute fighting major and 10-minute misconduct, leaving the Rangers on the power play.

The Canes were seconds away from killing it off when Vatrano buried a shot after a sharp pass from Copp.