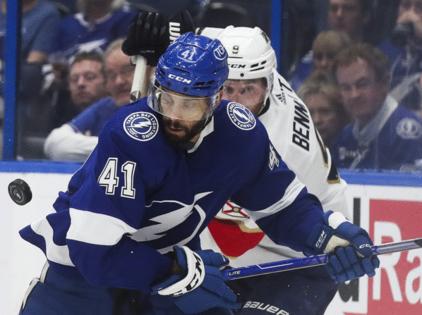 TAMPA, Fla. — All these years later, how do they do it?

Not just the winning. That’s explained easily enough with a stat here and an Andrei Vasilevskiy there.

No, after all the records, awards, championships, farewells, arrivals, injuries, slumps, salary caps, grudges and community heroes, how do they pull off the most remarkable feat in sports?

How do the Lightning make you fall in love all over again?

Because that’s what this group has done. They are two years past the honeymoon and still surprising us every day with new thrills and forgotten sparks.

The temptation is to look at Monday night’s 2-0 victory at Amalie Arena that completed a second-round sweep of Florida, and to think of it simply as a continuation of the back-to-back Stanley Cup titles.

And, in a big-picture sense, that’s accurate enough. But there is more to this story.

The Lightning have become ingrained in Tampa Bay in a way that no other franchise has quite pulled off. Sure, the Bucs have more fans. And the Rays have the benefit of playing America’s Pastime.

But there’s something special about the way the Lightning reinvented themselves after the heartache of the 2019 postseason collapse. They went from a team that dazzled you with skill to a group that impressed you with heart. And two years later, they continue to find ways to remind you of that.

“You’ve got to sacrifice so much (of your) body and that’s part of the plan. You have to do it if you want to win,” coach coach Jon Cooper said. “These guys are playing a game right now, almost like they have not won a Stanley Cup. Like they’re chasing (it) for the first time.”