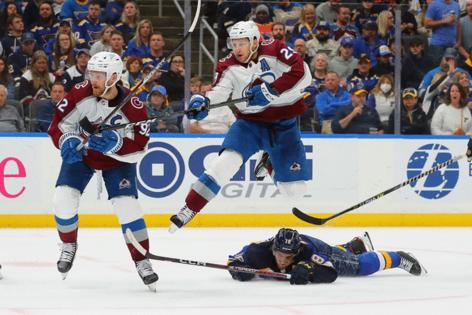 ST. LOUIS — Nazem Kadri scored a goal on Monday night in Game 4 — the second of four consecutive for the Avalanche and the first of three for him in the game — and the St. Louis Blues couldn’t stand it.

The hosts were being dominated by Colorado at Enterprise Center and Kadri’s first of two goals in a stretch of 3:30 caused two St. Louis players to lose their composure during the second period.

Pavel Buchnevich and David Perron attacked Kadri, piling on top of him, leading to a 5-on-3 Blues disadvantage and ultimately their demise in the Avs’ 6-3 victory that gave them a 3-1 lead in the Western Conference semifinal series.

Trailing 1-0, the Avs scored four goals in a span of 4:53. Veteran defenseman Erik Johnson began the stretch 2:44 into the second period and Kadri gave Colorado its first lead at 4:07. That’s when the Blues became unhinged at public enemy No. 1 in this arena.

At 5:30, Buchnevich and Perron attacked Kadri in front of the St. Louis bench. They got their licks in but were assessed roughing (Buchnevich) and cross-checking (Perron) penalties to send Colorado on a 5-on-3 power play.

The Blues, trailing 3-1 at that point, killed off the two-man advantage but Kadri scored his second goal of the game seven seconds after it expired — with both Blues trying to defend on the play. Perron skated by Kadri amid his celebration and tried to deliver an elbow to his head. He missed. St. Louis was down 4-1.

Kadri, who grew up as a Canadian Muslim, was blamed for injuring Blues goalie Jordan Binnington by Blues fans early in Game 3 on Saturday. But the contact in the crease wasn’t initiated by Kadri, who was shoved into Binnington by Blues defenseman Calle Rosen. There was no penalty but Binnington left the game and the Avalanche went on to win 5-2 for a 2-1 series lead.

Kadri received racist threats between Games 3 and 4 — presumably by Blues fans — and the club refused to defuse the situation on Monday. Kadri was again booed every time he touched the puck on Monday but was clearly the player of the game.

The Blues rallied from a deficit behind Buchnevich and Perron, who scored two power-play goals to complete the second period. Perron scored with Darren Helm in the box for hooking and Buchnevich made it 4-3 while Johnson was serving an interference minor.

Kadri, however, completed his hat trick midway through the third period for a 5-3 lead. Mikko Rantanen scored an empty-net goal in the final seconds.

Game 5 is Wednesday at Ball Arena.

The Avalanche dominated long before their four consecutive goals. Colorado outshot the Blues 15-3 in the first period. But Blues goalie Ville Husso was excellent and Perron gave the Blues a 1-0 lead off an Avs turnover and a Buchnevich pass from behind the net with a great play in front of goalie Darcy Kuemper.

Following Johnson’s wrist shot from the blue line and Kadri’s wrister from the right circle, defenseman Devon Toews gave the Avs a 3-1 lead with a low shot from between the circles. Just 1:04 later, Kadri was attacked.

Footnotes. The Avs were without defenseman Sam Girard, who sustained a broken sternum on his first shift in Game 3 and will miss the rest of the postseason. But Girard was back with the team on Monday and was spotted at the morning skate. “He’s a little sore today but it’s good to see him up and about and in good spirits here with the guys, for sure,” coach Jared Bednar said. Defenseman Jack Johnson, who played in 74-of-82 regular-season games, replaced Girard on a pairing with Josh Manson. Forward Alex Newhook made his postseason debut by also replacing Andre Burakovsky, a healthy scratch. The Avs’ other healthy scratches were defensemen Kurtis MacDermid and Ryan Murray. Burakovsky had played in 80 regular-season games and all seven previous playoff contests.