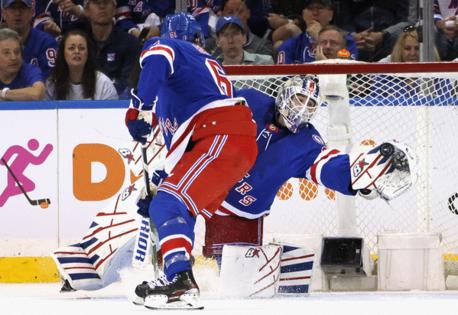 NEW YORK — A five-word message was waiting Sunday for the Carolina Hurricanes at Madison Square Garden: “No Quit in New York.”

It was on white rally towels and T-shirts left in the seats and shown on the massive scoreboard. And displayed on the ice by the New York Rangers.

In another tight, low-scoring game that again featured the two goaltenders — New York’s Igor Shesterkin and the Canes’ Antti Raanta — the Rangers emerged with a 3-1 win in Game 3 of the best-of-seven series.

Game 4 is Tuesday at the Garden, the Canes looking to take a 3-1 lead back to Raleigh the Rangers seeking to square the series. Carolina is 6-0 at home, but now 0-4 on the road.

After losing the first two games of the series at PNC Arena, the Rangers returned to the Garden confident they could get a home-ice win while also knowing it was a must. Not an elimination game, but 0-3 in a series is a bad place to be.

The Rangers then played it that way, taking the lead, never giving it up and killing off four penalties as the Canes’ power-play struggles continued — Carolina is 5-for-44 in the playoffs. Shesterkin was in the middle of it all, giving up one soft goal but closing it down from there.

New York’s Mika Zibanejad scored a power-play goal for a 1-0 lead in the first period and Chris Kreider’s snipe of a shot in the second period made it 2-0.

Zibanejad’s goal came on a quick shot from the left circle, ending Raata’s shutout streak of almost 148 minutes. Zibanejad then had a hand in the Kreider goal, legally lifting the stick of defenseman Tony DeAngelo, who had it slip out of his hands and was defenseless as Kreider got off a shot that beat Raanta to the short side.

The Garden was loud and the Rangers seemingly surging.

And then Nino Niederreiter scored for the Canes.

Shesterkin, despite giving up some rebounds, stopped all 17 Carolina shots in the first period and was continuing to shut down the Canes until Niederreiter flipped backhander at him.

No quit in the Canes, either. They continued to push in the final two periods as they kept forechecking pressure on the Rangers shift after shift.

Even when Andrei Svechnikov took an interference penalty in the offensive zone in the second period, being a little over-aggressive, the Canes killed it off. And Svechnikov ended up with a good scoring chance, jumping out of the penalty box to push it down the ice and get off a shot.

The Canes outshot the Rangers 18-10 in the second and had a 35-23 edge through two periods. Jordan Staal was high-sticking late in the period and the Canes began the third with 1:33 of power play time.