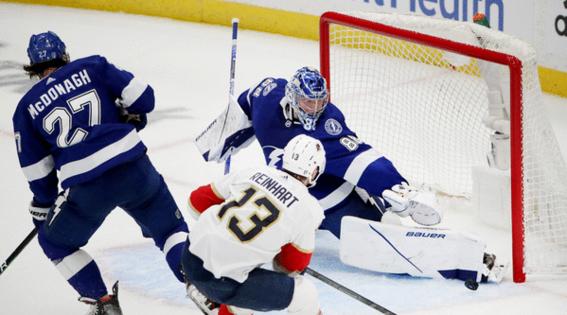 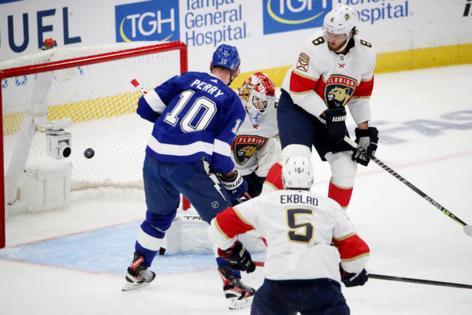 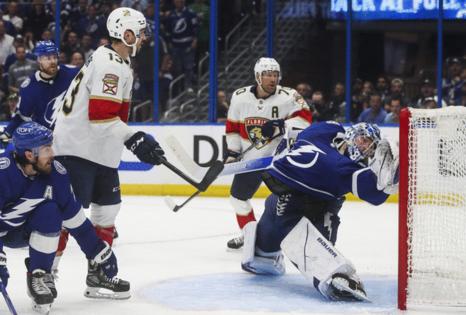 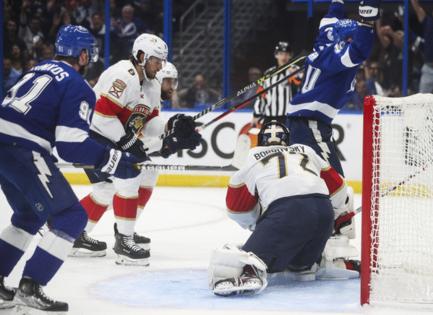 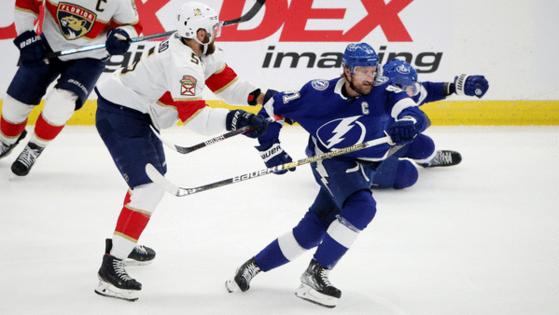 TAMPA, Fla. — There’s no number on the stat sheet that quantifies killing an opponent’s confidence, but the Lightning put a Panthers team with the best record in the regular season on the brink of elimination Sunday afternoon by taking away their will to win.

Their 5-1 victory over Florida means the Lightning can advance to the Eastern Conference Final for the third straight season with one more win after taking a commanding 3-0 series lead over the Panthers.

This series has been all about defense. Goaltender Andrei Vasilevskiy has been fantastic, as have been the skaters playing defense in front of him.

On Sunday afternoon, the Lightning left the door open for a frustrated Panthers team, allowing a first-period power-play goal after Brandon Hagel was whistled for cross checking from behind when Florida center Eetu Luostarinen lost his balance and awkwardly fell into the boards.

Sam Reinhart’s goal from the bumper spot ended their 0-for-25 power-play drought in the playoffs and seemingly gave a sleeping giant confidence.

Erik Cernak’s goal 2:54 into the second period took some air out of the Panther but two Lightning penalty kills in that period really changed the momentum of the game.

When Victor Hedman went to the box for an interference penalty 6:37 into the second, the Panthers — knowing scoring on the power play was again possible — responded with a surge.

But the Lightning formed a wall in front. In the two-minute power play, they blocked five shots, Vasilevskiy scooted from post-to-post denying shots in close, and Ryan McDonagh flicked a puck away that was skipping toward the near post.

Moments after completing that penalty kill, the Lightning were skating the other way and Nikita Kucherov scooted behind the rush and fed Steven Stamkos for a one-timer at the left circle that beat Florida goaltender Sergei Bobrovsky for a 3-1 Tampa Bay lead. Kucherov and Stamkos both had empty-netters in the third period to close out scoring.

This postseason, the Lightning have neutralized two of the league’s top power play units — Toronto was No. 1 in the NHL and Florida ranked fifth — posting an 86.9-percent success rate that is a marked improvement over their 11th-ranked 80.6-percent regular-season mark.

And they have done it with a restructured group. They not only lost top PK forwards Blake Coleman and Barclay Goodrow in the offseason, but at the trade deadline dealt away top penalty-killing forward Mathieu Joseph. Since then, Nick Paul — the player they acquired in the Joseph trade — has paired with Anthony Cirelli to form the top PK forwards.

Now the Lightning can eliminate the winners of the Presidents’ Trophy, a Panthers team that lead the league with 4.11 goals a game, as soon at Monday night at Amalie Arena.