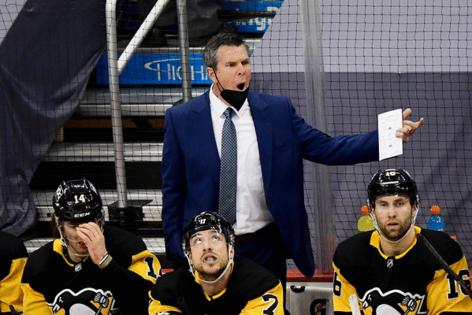 PITTSBURGH — His season began with COVID-19, which forced him to miss five games in November.

"It hit me pretty hard," Penguins coach Mike Sullivan was saying last week. "It was a tough few days."

It continued with the NHL's decision to skip the Beijing Olympics in February, denying him the chance to live out his dream of coaching the U.S. hockey team.

Finally, it ended with the Penguins' sudden exit from the playoffs in a seven-game, first-round series against the New York Rangers.

"I feel the losses way more than the wins because we're so invested in trying to help this team have success," Sullivan said. "When you don't reach your ultimate goal, it stings. It makes a mark."

Sullivan spoke on those topics and many others during a 75-minute interview Thursday at his office at team headquarters in Cranberry, Pa. He talked about the perception the Penguins aren't tough enough to win in the playoffs. He talked about his relationship with the team's new ownership group and his job security after the Penguins' fourth consecutive first-round exit. And he talked about the team's future, which might not include free agents Evgeni Malkin, Kris Letang and Bryan Rust, all players he would love to keep.

"I feel good about this team moving forward," Sullivan said. "When your captain is Sidney Crosby and he plays the way we all know he's capable of playing and he leads the team through example the way he does, he represents the standard. He is all about winning."

There were plenty of highs for Sullivan this season, to be sure. The Penguins went on a 17-2 run that helped them make the playoffs for the 16th consecutive year. Sullivan set franchise records for regular season wins (297) and postseason wins (44). He became the second-longest tenured NHL coach behind Tampa Bay's Jon Cooper after Winnipeg's Paul Maurice resigned in December and Detroit's Jeff Blashill was fired in April.

But none of that eased the hurt from that series loss to the Rangers. Despite wasting a 3-1 edge in the series and leads in each of the final three games, Sullivan believed the Penguins often were the better team and easily could have won. He believed the same thing after their six-game loss to the New York Islanders in 2021.