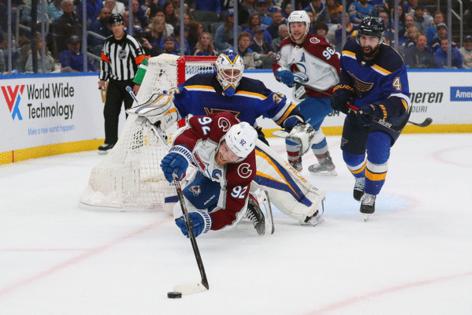 ST. LOUIS — You didn’t think the Avalanche would go away quietly, did you? Of course not. Colorado avenged Thursday’s home loss to the Blues, defeating St. Louis, 5-2, Saturday in Game 3 of their second-round playoff series.

They are now halfway home to advancing to the Western Conference finals, up two games to one in the best-of-seven playoff series. Call it a case of the Empire Strikes Back. Stanley Cup favorites since really the start of the season, the Avalanche have retaken control of the series.

It was an intense, hotly-contested game, with Colorado scoring the equivalent of two empty-net goals in the final two minutes in what was essentially a 3-2 game. The big question for the Blues heading into Game 4 becomes: What happens with Jordan Binnington, the now-injured Blues goalie?

Almost a year ago to the day, Nazem Kadri knocked Justin Faulk out of Game 2 of the Blues’ opening-round series with Colorado with an illegal check to the head. Faulk was done for the series; Kadri was suspended eight games.

Kadri was at it again Saturday, knocking Binnington out of the game with 13 minutes, 15 seconds left in the opening period. Kadri and Calle Rosen both were racing for a loose puck heading dead on at Binnington.

Kadri, making no attempt to slow down, lowered his shoulder and leaned into Rosen — causing Rosen to crash into Binnington. Kadri also fell on top of Binnington on the play. There was no penalty called.

Binnington stayed down on the ice and head athletic trainer Ray Barile was out on the ice quickly. Binnington was slow to get up and then was helped off the ice and down the tunnel to the locker room. Enter Ville Husso, last seen in Game 3 of the Minnesota Wild series.

Just 2 minutes, 18 seconds after Binnington left, Colorado tied the game on the second shot on goal against Husso. Logan O’Connor, inserted into the Avalanche lineup for Game 3, scored his first career playoff goal.

O’Connor corralled a high pass right at the blueline, and skated in tight to beat Husso, making it a 1-1 game. But was he offside on the play? The Blues took a long look — it was very close — but decided not to challenge. So it was a goal and a tie game.