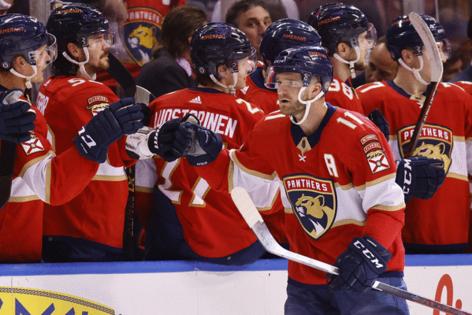 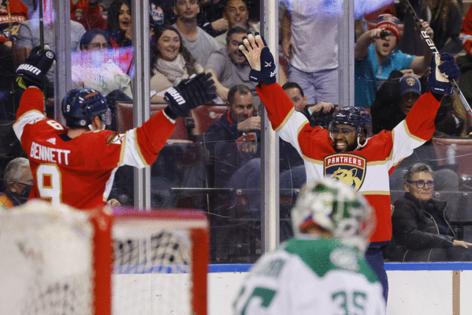 On Thursday, Florida Panthers winger Jonathan Huberdeau was named an NHL All-Star for the second time in his career.

On Friday, he showed once again why that honor was justified with a four-point game.

But his latest night of dominance was overshadowed by one of his linemates.

Sam Bennett recorded his second hat trick of the season after scoring each of the Panthers’ final three goals in a 7-1 rout of the Dallas Stars at FLA Live Arena to improve to 25-7-5 on the season and 20-3-0 at home. Florida is once again tied with the Tampa Bay Lightning for the most points in the NHL (55), but the Panthers have done it in two fewer games.

It was Bennett’s second hat trick of the season, with the first coming on Oct. 16 against the New York Islanders.

As for Huberdeau, he now has 51 points (14 goals, 37 assists) through 37 games this season after scoring a goal and logging three assists on Friday. Only one player in Panthers history hit the 50-point milestone faster: Pavel Bure, who did it in 34 games in the 1999-2000 season.

Only three players in the NHL this year have more points than Huberdeau: The Edmonton Oilers duo of Leon Draisaitl (53) and Connor McDavid (53) plus the Washington Capitals’ Alex Ovechkin (52).

They both were unbelievable on Friday.

Huberdeau was involved in each of the first two goals, logging a secondary assist on Gustav Forsling’s goal 3:07 into regulation and feeding a pass to Anthony Duclar a little less than six minutes later to give Florida an early 2-0 edge that would hold through the end of the first period.

Huberdeau then scored a goal of his own 6:03 into the second period, firing a wrist shot from the slot past Jake Oettinger after receiving a pass from Duclair.

It was part of a four-goal period for the Panthers. Carter Verhaeghe opened scoring in the frame Bennett scored twice in less than three minutes — first on the power play and then at even strength — to give Florida a 6-0 lead and then sealed the hat trick with 4:06 left in regulation. Huberdeau had a secondary assist on that goal.

Sergei Bobrovsky made 29 saves, including stopping the first 21 shots that came his way before losing the shutout on a low backhanded shot from Roope Hintz a little more than a minute into the third period.

Bobrovsky is 6-0-1 in his last seven starts.

ST. PAUL, Minn. — Kirill Kaprizov wasn't the only one to leverage a lull in the schedule to his advantage.

The entire Wild lineup emerged rejuvenated from a five-day break.

In its first game in nearly a week, the team ...Read More

LOS ANGELES — Just hours after Tristan Jarry was honored with his second career All-Star Game nod, the Pittsburgh Penguins skaters gave the goalie a great chance to show why.

And that’s not a good thing.

During an ...Read More

TAMPA, Fla. — The arrival of the Canucks at Amalie Arena offered the Lightning an interesting matchup.

DETROIT — One team was healthy but weary from travel, the other fresh but decimated by the pandemic.

The Detroit Red Wings were put on their heels early Thursday at Little Caesars Arena, and couldn’t muster the energy...Read More

BOSTON — After three consecutive days of practice that saw the returns of Claude Giroux, Ivan Provorov, Travis Sanheim, and Travis Konecny from COVID-19 protocols, the Flyers may have gotten well, but they didn’t get ...Read More