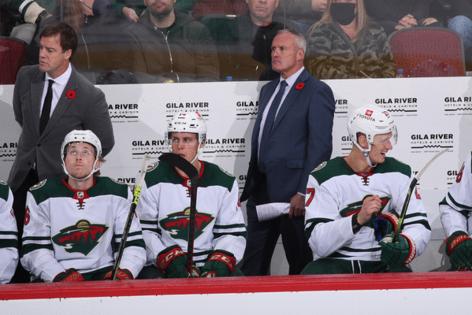 ST. PAUL, Minn. — Kirill Kaprizov wasn't the only one to leverage a lull in the schedule to his advantage.

The entire Wild lineup emerged rejuvenated from a five-day break.

In its first game in nearly a week, the team routed the Ducks, 7-3, on Friday in front of 18,300 at Xcel Energy Center to seal its third straight win.

Mats Zuccarello scored twice and set up another, Kaprizov assisted on two goals and Matt Boldy picked up his first career multipoint game.

At the other end, Kaapo Kahkonen made 39 stops in his third consecutive start in place of injured No.1 Cam Talbot and improved to 7-1-1 over his last 10 games.

Anthony Stolarz had 23 saves for Anaheim before getting pulled after giving up three goals in 1 minute, 35 seconds early in the third period, including two in just four seconds. Lukas Dostal had 12 stops in relief.

Those back-to-back tallies, from Boldy and Zuccarello, were just one second shy of tying the Wild record for fastest two goals in team history.

A parade of goals is also how the Wild started the evening.

Just 7:25 into the first period, Boldy passed off to Kevin Fiala, who deked before sending the puck by Stolarz for his fourth goal during a season-high five-game point streak. Fiala needs just one more goal to become the fourth Swiss-born player in NHL history to reach 100 for his career.

LOS ANGELES — Just hours after Tristan Jarry was honored with his second career All-Star Game nod, the Pittsburgh Penguins skaters gave the goalie a great chance to show why.

And that’s not a good thing.

During an ...Read More

TAMPA, Fla. — The arrival of the Canucks at Amalie Arena offered the Lightning an interesting matchup.

DETROIT — One team was healthy but weary from travel, the other fresh but decimated by the pandemic.

The Detroit Red Wings were put on their heels early Thursday at Little Caesars Arena, and couldn’t muster the energy...Read More

BOSTON — After three consecutive days of practice that saw the returns of Claude Giroux, Ivan Provorov, Travis Sanheim, and Travis Konecny from COVID-19 protocols, the Flyers may have gotten well, but they didn’t get ...Read More

ST. LOUIS — For the Kraken this season, it feels like if it’s not one thing it’s another.

They got strong goaltending and penalty killing against a prolific Blues power play but only generated a single goal in a 2-1...Read More