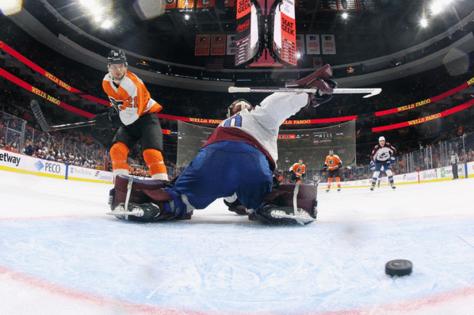 PHILADELPHIA — More than 15 minutes into the first period with the Avalanche up 3-1, defenseman Cale Makar embarrassed the Flyers’ penalty kill.

Makar carried the puck from behind his own net, through the neutral zone, and past defenseman Ivan Provorov and Justin Braun at the blue line to score bar-down on goalie Martin Jones.

That very moment, the second of back-to-back Avalanche power-play goals, could’ve been enough for the Flyers to give up entirely. After all, they did exactly that the night before when they were ‘embarrassed’ 7-1 by the Tampa Bay Lightning, which ultimately led to former head coach Alain Vignelt’s firing.

But even though the Flyers would lose 7-5 to the Avalanche, Makar’s goal sparked a push from the Orange and Black. Winger Oskar Lindblom scored his first goal of the season less than a minute after Makar’s tally and captain Claude Giroux earned his second of the night less than two minutes after Lindblom’s.

For the first time since their 5-3 victory over the Edmonton Oilers on Oct. 26, the Flyers registered more than three goals in a game. However, going into their matchup against the Flyers, the Avalanche led the NHL in goals per game (4.00) and performed well above average on Monday night.

Giroux gets going on offense

Three days before the Flyers would go on to fire Vigneault, Giroux acknowledged that the team’s inability to score on the power play started with him. Throughout the 18 games leading up to their tilt against the Avalanche, the Flyers had only capitalized on 5 of 56 power plays (8.9%). With the weight of Vigneault’s firing on his shoulders, Giroux scored two goals on Monday.

One of those goals came on the Flyers’ second power play of the first period. Defenseman Keith Yandle had a good keepin on a high pass from Giroux at the blue line and passed the puck to winger Travis Konecny. He closed in and sent a cross-ice pass to Giroux, whose one-timer found the back of the net to put the Flyers, previously down 4-2, within one. With his goal, Giroux tied Bobby Clarke for most power-play points in franchise history (333).

Earlier, Giroux also tallied the first goal of the night, firing a one-timer from the high slot with plenty of unobstructed ice between him and goalie Justus Annunen.