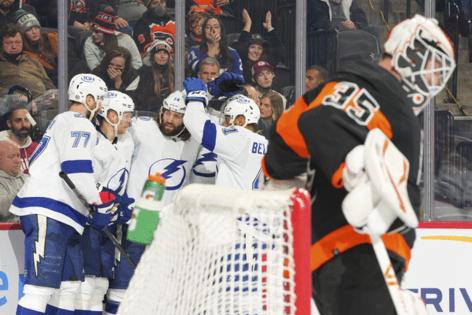 Games on back-to-back days are always tough, but the Lightning’s poor performance Saturday seemed to be a wake-up call. Even if they were weary from a short night of sleep, they came out of the gate energized for their 6 p.m. puck drop against the Flyers in South Philadelphia.

After chasing pucks for most of the game the night before, the Lightning scored on back-to-back shifts early, taking a two-goal lead within the first 10 minutes before pouring it on en route to a commanding 7-1 win over the Flyers at Wells Fargo Center.

The Lightning (15-5-4) took advantage of a struggling Flyers team that have now lost eight straight, a stretch that began with Tampa Bay’s overtime win Nov. 18 in Philadelphia.

Early goals by Ryan McDonagh and Corey Perry, both coming after collecting loose pucks near the net, gave the Lightning momentum in the first period. After rookies Taylor Raddysh and Boris Katchouk scored — and Mathieu Joseph was gift-wrapped a goal when goaltender Carter Hart failed to clear the puck — boos filled the arena, and Hart was pulled after allowing five goals before the midway point of the game.

Those boos turned into intermittent calls of “Moooooose,” a homage for Lightning goaltender Brian Elliott, who played the previous four seasons for the Flyers and earned the win in net for Tampa Bay.

Katchouk’s goal 6:47 into the second period was his first in the NHL. After rookie fourth-liners Katchouk and Raddysh went through the Lightning’s first 22 games without a goal, the pair have three in two games this weekend.

Raddysh, who scored his first goal Saturday in Boston, rifled a slap shot from the right circle after defenseman Victor Hedman collected the puck in the neutral zone and led a 3-on-2 rush.

Katchouk then capitalized on a puck that landed at Hart’s right skate, tucking it inside the near post for his first goal. After his first time leading fist-bumps past the Lightning bench, Katchouk received hugs from his “Kid Line” mates Raddysh and Ross Colton.

After the Flyers dictated the pace for the first few minutes, the Lightning tilted the ice in their favor by playing and an aggressive, straight-ahead game they didn’t display the night before in Boston.