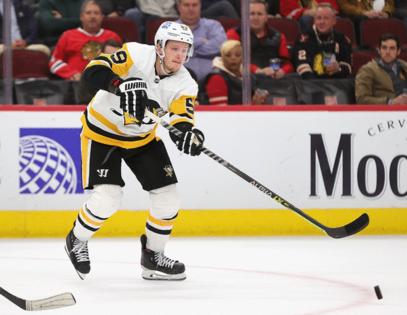 Guentzel continued to torment Canadian hockey clubs on Saturday with his fourth career hat trick and a four-point night as the Penguins beat the Vancouver Canucks, 4-1, at Rogers Arena. The victory snapped their three-game losing streak.

Guentzel arrived in Vancouver with an NHL-best 11-game point streak, including a goal in each of the first two games on this road trip. After pouring in three more in Saturday’s win, he now has at least one in his past six games in Canada.

Overall, Guentzel has 10 goals in his past 11 games. His teammates have 18.

The struggling Penguins are going to need some goals from other guys at some point. But on Saturday, they had Guentzel. And that was more than enough.

The first period was tightly checked by both teams. The best chance in the period went to Guentzel, who was sprung on a 2-on-1 by a clever between-the-legs pass by Evan Rodrigues. But he couldn’t tuck the puck behind Thatcher Demko.

The first of his three second-period goals showed just what kind of heater Guentzel is on right now. After Brian Dumoulin’s shot from the point hit a body in front and the puck bounced Guentzel’s way, he just let it rip from the right circle. It hit the skate of Canucks defenseman Oliver Ekman-Larsson and went in.

Vancouver’s Vasily Podkolzin tied the score at 1-1, but the Penguins buried a pair of power-play goals after the Canucks took three penalties in 51 seconds.