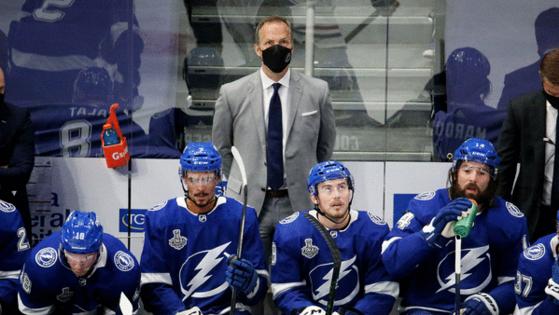 Lifted by rookie Taylor Raddysh’s first NHL goal early in the game and a lucky bounce that gifted them a two-goal lead, it seemed just a matter of time before the Bruins would cash in on a game full of near misses.

The Lightning fought themselves in their own zone, struggling to maintain puck possession and get any sustainable offensive zone time, and the Bruins took advantage.

Lightning goaltender Andrei Vasilevskiy was a wall, and he might have played he best game of the season, given the volume and quality of the chances he faced.

But after Tampa Bay wasted a two-goal lead and the game went into overtime, Steven Stamkos scored the winner 1:31 into the extra period for a 3-2 win. Stamkos’ goal came just seconds after Vasilevskiy stopped David Pastrnak on a breakaway.

The game seemed to be a ticking time bomb, with the Lightning just waiting for their lead to be blown. Boston’s Curtis Lazar scored 4:44 into the third period to tie it at 2.

Before that, the hustle that Raddysh has shown since training camp paid off with 5:47 left in the first period and the Lightning on the penalty kill.

Defenseman Mikhail Sergachev attempted to clear the puck down the ice when it hit off Bruins defenseman Mike Reilly. Raddysh was charging north and caught the puck on his stick as he entered the neutral zone, skating along the left side.

With Reilly at his hip, Raddysh tucked in for a forehand fake that dropped goaltender Jeremy Swayman to his knees. Raddysh then brought the puck back for a backhanded shot over Swayman’s right pad inside the near post for Tampa Bay’s first short-handed goal of the season.

Raddysh has gradually earned his way onto the Lightning’s penalty-kill unit, which lost three of its top five forwards from last season. The way players such as former Bolts Blake Coleman, Barclay Goodrow and Yanni Gourde tilted games with pressure they brought on the penalty kill, it has been a tall task replacing them.

The Lightning desperately needed that kind of momentum shift in the first period Saturday. The Bruins not only dominated zone time in the opening period, but they applied constant pressure on Vasilevskiy, who stopped all 12 shots on goal in the period and saw an onslaught of 29 shot attempts.

In fact, the Bruins pelted Vasilevskiy throughout the game as the Lightning struggled to get sustained zone time in their offensive end.

It seemed every Bruins shot on net was nearly a goal early on. Boston center Patrice Bergeron was all over the place. In one sequence he had a shot on net from the left circle on a 2-on-1 breakaway, then seconds later was swatting a puck toward the net from the slot.

After Bruins forward Pastrnak hit his second post of the game and Vasilevskiy swept to the far post to cut off Taylor Hall’s shot, Ondrej Palat had a rare Lightning rush. While trying a cross-slot pass to Stamkos, the puck hit off Boston’s Tomas Nosek’s skate through traffic in front of the net and past Swayman, giving the Lightning a 2-0 lead 3:36 into the second.

Still, the Bruins were putting so much pressure on the Lightning net, a goal was inevitable. Vasilevskiy stopped the first 25 shots he faced before Charlie Coyle buried a rebound inside the near post with 3:20 left in the second, bringing life to the home crowd.

Boston dominated the Lightning in the faceoff circle, and Tampa Bay struggled with puck possession throughout the game, turning the puck over in their own zone to set up Bruins scoring chances.

Even though they never met last season, the Lightning and Bruins have developed a rivalry over the years as division rivals and frequent postseason foes. And while Saturday’s game didn’t replicate the last time the teams met in Boston — when they combined for 94 penalty minutes — there was a unique intensity in their first of four regular-season meetings this season.