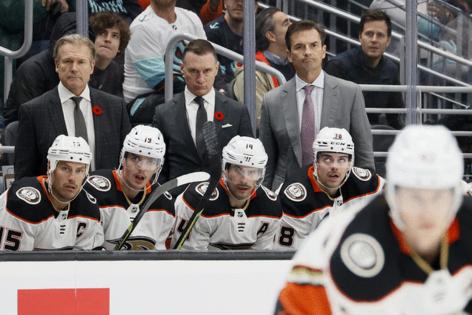 The first meeting this season between the Kings and the Ducks felt like the good old days of seven or eight years ago, when both teams ventured deep into the Stanley Cup playoffs every spring and their every encounter was a rugged battle for every inch of the ice.

They've endured tedious rebuilds and non-playoff finishes recently, and although both have made progress, neither has gotten far enough to be considered a title contender again. But the intensity of their play and the sprinkling of skill they displayed in the Ducks' 5-4 shootout victory Tuesday night at Staples Center represented progress for both teams, and they could appreciate that.

"That was an exciting hockey game. Two teams trying to do the same thing at the same time. And I thought both teams worked extremely hard tonight," Ducks coach Dallas Eakins said after his team withstood a three-goal rally in the third period by the Kings and prevailed on shootout goals by extraordinary rookie forward Trevor Zegras and veteran defenseman Kevin Shattenkirk.

"In a perfect world, do we want to close out that game 4-1? Absolutely. Will we address some places where we can be better? Absolutely."

The Kings, who have followed a seven-game winning streak with a 1-3-3 skid, regained the inestimable services of defenseman Drew Doughty, who had missed 16 games because of a bruised knee. He played 27 minutes and 55 seconds, took three shots, delivered two hits and blocked two shots, his old self once again.

"That felt good. That was a great comeback," he said. "They got some pretty lucky goals tonight. Unfortunately, we had some bad bounces against us, but it showed a lot of heart to come back and tie it up. It's just that we didn't get that win."

That gnawed at Kings coach Todd McLellan, too. "You've got to find a way to get past close," he said, "and that's where we are right now."

They're a couple of points out of a wildcard playoff berth in the Western Conference. The Ducks are third in the Pacific Division, which would put them in the playoffs.

He also said he expects to learn Wednesday the extent of the lower-body injury that took team captain Ryan Getzlaf out of Tuesday's game early in the first period. Getzlaf, who has had a resurgence this season and would be missed if he were out long-term, will be reevaluated by team doctors.