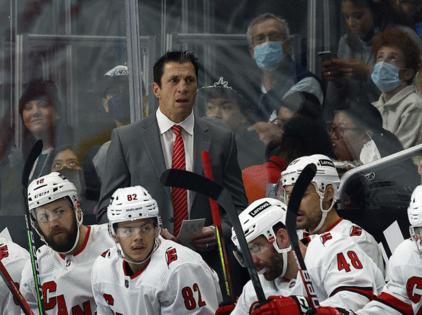 Carolina Hurricanes coach Rod Brind’Amour has been fined $25,000 for inappropriate conduct during Sunday’s game against the Washington Capitals at PNC Arena, the NHL announced Tuesday.

Brind’Amour was livid late in the game after a slashing call against Canes center Sebastian Aho. Following a holding penalty against the Canes’ Seth Jarvis, the slashing call gave the Caps 90 seconds of a 5-on-3 advantage and had Brind’Amour yelling at the referees.

Washington did not score with the two-man advantage but moments later Dmitry Orlov’s power-play goal gave the Caps a 3-2 lead. Washington won 4-2 to move into solo first place in the Metropolitan Division.

Aho’s slashing call was made after he broke the stick of the Caps’ Aliaksei Protas along the boards near the Carolina bench. The Caps’ Alex Ovechkin quickly raised an arm, as if asking for a call, and the referee then raised his arm to signal the penalty.

Brind’Amour was calm during his postgame comments, saying, “It’s a tough way to end a game. It was a great game, great hockey game. ... It’s unfortunate. What are you going to do?”

In his pregame interview Tuesday with Canes analyst Tripp Tracy on Bally Sports South, Brind’Amour said he was disappointed with the process.

“To be told your (conduct) was in appropriate is tough,” Brind’Amour said in the interview. “I don’t think it is inappropriate to get upset and show a little emotion. I’ve been in the game 34 years and I know the referees and have great respect for them. ... I think that emotion is part of the game. There’s a line you can’t cross, obviously, and that’s when the refs usually come and tells you that’s enough, and that’s what happened. And we move on.”

Brind’Amour was fined $25,000 in August 2020 for criticizing the officiating during a double-overtime loss to the Boston Bruins in the Stanley Cup playoffs.

The fine money is turned over to the NHL Foundation.