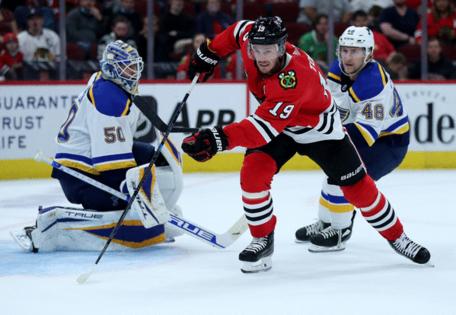 The Chicago Blackhawks center took a maintenance day while teammates practiced at Fifth Third Arena, his first such day this month after taking three in October.

“He’s been around, he knows his body,” interim coach Derek King said. “I just had a conversation with him, and I know he tires. “I just said, if you need a maintenance day just let me know or I’ll come to you and tell you stay off the ice.

“We talked yesterday (Friday) after the (St. Louis Blues) game, and I decided with him it’s best he stay off the ice, get some rest and recharge the batteries and be ready to go against San Jose” on Sunday.

For Toews, who has Chronic Immune Response Syndrome, his health and energy levels need to be monitored constantly, but he has been handling almost the same workload as two seasons ago.

In 2019-20, he averaged 19 minutes, 47 seconds. After missing last season with CIRS — he also said he tested positive for COVID-19 antibodies —his average ice time is down more than a minute to 18:04.

But Toews still works in all phases of the game, centering one of the top lines and pitching in on the top power-play and penalty-kill units.

King recently shuffled the lines and has Toews working alongside Patrick Kane and Brandon Hagel, which means heavy-duty offense. And Toews has shown no drop-off on faceoffs — he’s still winning at a 57% clip.

Certainly the Hawks have needed him, but King has become mindful that Toews’ availability has limits. It’s not just the wear-and-tear of games but practices and morning skates with few team off days in between.

“Yeah, I need to pull him back,” King said. “He’s not going to pull himself back. He’ll go on the ice with broken legs and arms. He’ll just keep going until someone comes to him.