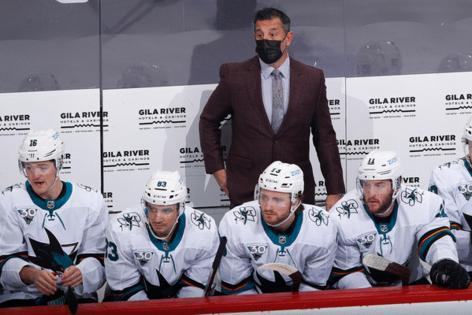 It was more of a mercy move by Boughner than a reflection of Reimer’s play to that point.

The Sharks didn’t defend or manage the puck the way they needed to against the explosive Leafs, who scored four times on their first 17 shots to pick up a 4-1 win before an announced crowd of 14,068 at SAP Center.

The Sharks allowed even-strength goals to William Nylander, Wayne Simmonds, and Auston Matthews before John Tavares scored a power-play goal at the 10:44 mark of the second period.

That led Boughner to make the switch from Reimer to Adin Hill, although Toronto’s goals to that point had more to do with some suspect defense by the Sharks in their own zone than the play by the goalie.

Nick Bonino had the lone goal for the Sharks, whose record dropped to 10-9-1.

The Sharks closed their homestand with a 2-2-0 record and now begin a five-game road trip that starts Sunday in Chicago, followed by games with the New Jersey Devils, New York Islanders, New York Rangers, and Columbus Blue Jackets.

The Sharks announced Friday afternoon that general manager Doug Wilson would be taking a temporary medical leave, and that assistant GM Joe Will would take over day-to-day duties.

Wilson, 64, has dealt with a persistent cough since at least early September. He had the cough when he spoke with reporters at the start of the Sharks’ training camp later that month, and was still bothered by it when he last spoke with the media on Nov. 12 in advance of his induction into the Hockey Hall of Fame in the Player Category.

Wilson’s condition is not believed to be COVID-19 related. Doctors are now prescribing rest for Wilson, whose sleep has been affected. He is now at his home in Scottsdale.