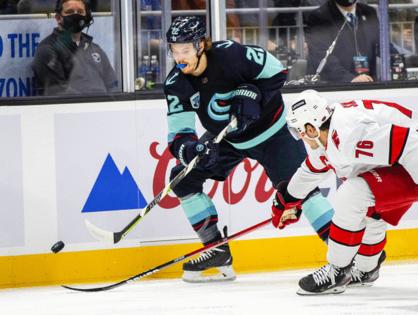 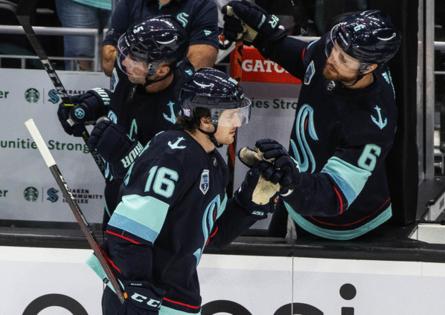 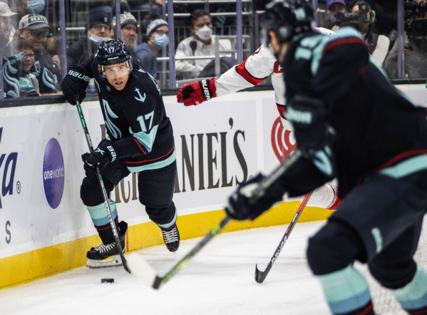 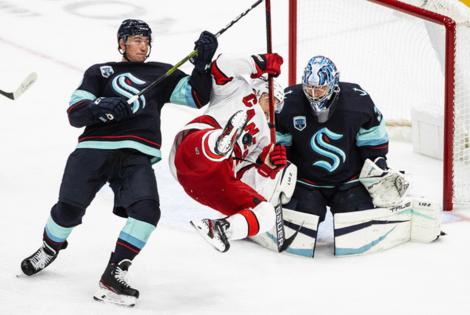 Among questions facing the Kraken heading into Wednesday night’s showdown against arguably the NHL’s best team was whether they would sustain the effort from a slump-snapping victory a few nights before.

The answer came a few minutes into the second period of this 2-1 win over the Carolina Hurricanes when Jared McCann scored his team-leading fifth power-play goal. That slap shot marker from the top of the left faceoff circle enabled McCann’s team, for the second straight game, to overcome the dispiriting setback of having fallen behind despite largely outplaying their opponent.

Marcus Johansson then helped win this thrilling contest with 3:08 to go in regulation time by emerging from behind the Hurricanes net and appearing to surprise Hurricanes goalie Frederick Andersen with a wrist shot that beat him short side. That ignited the crowd of 17,151 at Climate Pledge Arena that had seen the Kraken fight all night to stay in it, aided by standout goaltending from Philipp Grubauer and some timely blocked shots and broken up plays by defenders.

As usual, nothing came easy for the home side. The Kraken play a fast transition game and nearly got burned a few times on some turnovers and odd-man rushes.

But Grubauer stopped 35 of 36 shots for the win, on the heels of making 37 saves in Sunday’s win over the Washington Capitals.

For much of the first period, the Kraken had outskated and outhustled the Hurricanes only to see Brendan Smith pump a slap shot past a screened Grubauer from the left point with only 1:28 remaining. But rather than let down, the Kraken came out flying in the second and Brandon Tanev drew the early power-play chance on a hooking call to Jaccob Slavin that changed the game’s trajectory.

The two best chances on the Kraken power play just before McCann’s goal had belonged to the Hurricanes, the first coming when Johansson gave the puck away and Jordan Staal raced in on a partial breakaway only to have his wrist shot stopped by Grubauer.

Moments later, the Hurricanes broke in 2-on-1, but defenseman Mark Giordano got in front of a pass attempt and broke that play up as well.

The Hurricanes had their chances throughout a second period that saw them outshoot the Kraken 16-8 with help from a four-shot power play in which Grubauer and the penalty killers were scrambling to keep the puck out of the net. But keep it out they did – at least, long enough to go to the third period with a chance to knock off a top NHL team for the second straight game.

And Grubauer kept them in the contest in the third period as well, making two huge stops on Jordan Martinook from point-blank range on the same shift. The second of those saw Martinook take a pass alone in the circle to Grubauer’s left only to fire a snapshot into the goalie’s pads.

After snapping a six-game losing streak on Sunday against Washington, the Kraken had looked to finish this homestand strong against a Carolina team that began the day tied with Florida for the NHL’s highest points total but having done so in one fewer game.

This could be the best chance yet for coach Rod Brind’Amour and his core to bring home a Stanley Cup title after three straight playoff appearances. The Kraken spent much of the night playing like a team that knew only their best effort would get it done, making life difficult for Carolina netminder Andersen from the outset.

Kraken coach Dave Hakstol had talked before the game about how his players lately have been finding their way to rebounds and loose pucks and that’s just what happened early. Andersen appeared to misplay an early shot that got behind him and actually went off the goal post before a goalmouth scramble ensured in which Jordan Eberle nearly jammed the puck home.

Smith’s goal right after a Kraken power-play chance at the end of the period came on one of the few shots all night that Grubauer never saw. Hurricanes veteran Staal had set up shop in front of Grubauer, who never saw Smith’s incoming blast.

Conversely, Andersen didn’t see much of McCann’s partially screened shot on the second period power play chance. Neither did many of the fans that failed to realize a goal had been scored as the puck entered and exited the net in lightning quick fashion.

But the officials were on the case right away to signal a tying goal and the Kraken would be back in business for the remainder of the night.

SAN JOSE – Timo Meier scored the go-ahead goal with 8:42 left in regulation time to help lift the Sharks to a 6-3 win over the Ottawa Senators on Wednesday at SAP Center.

Meier took a pass from Rudolfs Balcers, made a ...Read More

PITTSBURGH — The Penguins, suddenly the hottest team in the NHL, had much to be thankful for at the end of this year’s annual Thanksgiving Eve game at PPG Paints Arena.

Bryan Rust scored for the first time since the ...Read More

SUNRISE, Fla. — The 2021-22 Florida Panthers will officially go down in history.

Aaron Ekblad scored with 2:21 remaining in overtime Wednesday to lift the Panthers to a 2-1 win against the Philadelphia Flyers and give ...Read More

It took the Lightning just over two minutes to turn a game upside-down Tuesday night in Montreal.