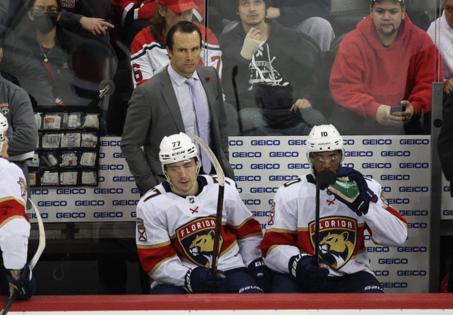 SUNRISE, Fla. — The 2021-22 Florida Panthers will officially go down in history.

Aaron Ekblad scored with 2:21 remaining in overtime Wednesday to lift the Panthers to a 2-1 win against the Philadelphia Flyers and give the Florida an NHL record-tying 11th straight home win to open the season.

Ekblad began the decisive possession near the net, then slid into the slot. The star defenseman fielded a pass, tapped one down to Jonathan Huberdeau on the doorstep, then got it right back from the star left wing to beat Flyers goaltender Martin Jones for the game-winning goal at FLA Live Arena.

The 1963-64 Chicago Blackhawks are the only other team in NHL history to open the season 11-0 at home. The Panthers (14-2-3) will have a chance to break the record Saturday when it hosts the Seattle Kraken in its first ever meeting with the expansion team.

For 10 games, the wins had mostly come easy. Florida averaged 4.8 goals and 35.3 shots per game throughout the first 10 games of the Sunrise winning streak, yet the Panthers were scoreless into the third Wednesday. The had rung the post four times, piled up literally dozens of scoring chances and close to a dozen high-danger opportunities, and still they trailed 1-0 because of one gaffe in the first period and a spectacular performance from Jones. Philadelphia winger Joel Farabee scored on a breakaway in the first eight minutes and it was enough to keep the Flyers in front until the third.

Florida was bound for a breakthrough, though, and it finally got one with a little more than 16 minutes left. The Panthers went on the power play for the first time with 16:25 remaining and needed only 24 seconds to capitalize. Anthony Duclair whipped a pinpoint pass from the right wing across the front of the net to fellow forward Sam Bennett, who tapped in the game-tying goal with 16:01 left.

Florida hadn’t scored a power-play goal since Nov. 6, going 0 of 16 in its last seven games. With an NHL record on the line, the Panthers finally ended their drought.

It was enough to get them into overtime. Goaltender Sergei Bobrovsky stopped 32 of 33 shots, including a breakaway in the extra period, to shut out Philadelphia for the final two periods and Ekblad came through in the end to keep Florida perfect at home.

DETROIT — The turkey is going to take a taste a little better for the Red Wings.

NEWARK, N.J. — The Wild didn't arrive on time for the game, but the team never fell behind on the ice.

Despite getting dropped at Prudential Center late — so much so that puck drop was pushed back about half an hour �...Read More

Calgary Flames forward Matthew Tkachuk’s goal broke a 2-2 tie late in the third period and saddled the Chicago Blackhawks with a 5-2 loss Tuesday.

TAMPA, Fla. — It didn’t matter that it was the third goal of the night for the Lightning.

It mattered much more that it was Corey Perry behind the shot, scoring his first goal of the season.

And the celebration said ...Read More